What is Biological Classification and Taxonomy?

It is basically the grouping of all organisms, be it plants, animals, and insects along with human beings under certain categories to help biologists and other scientists as well as those studying them differentiate among the organisms.

All organisms are grouped based on their similarities and differences into groups and sub-groups in a hierarchy.

Who and what led to biological classifications?

Initially started by the ancient Greek Philosopher Aristotle, he invented the multi-system to group organisms into different categories. But, the major effort was put in by a Swedish scientist named Carolus Linnaeus, who created the binomial nomenclature.

Binomial nomenclature is a system where each plant, animal, and every other organism in our ecosystem is given a name of two words from Latin origin; a genus and a species.

This system was soon used by biologists as well as other scientists all around the world and Linnaeus is now known as the ‘Father of modern taxonomy’.

What are the objectives of biological classification of organisms?

There are four main aims for classification:

Since a virus is neither living nor non-living, he didn’t include them in his system.

He used the following 5 criteria for his classification:

The 3 Domains of Life

Also known as the 6 kingdom system of classification, this was proposed by Carl Woese, a microbiology professor at the University of Illinois.

The 3 domain system is the biological classification that differentiates the cellular organisms into archaea, bacteria and eukarya categories.

It is vaguely based on the 5 kingdom classification system, but divides the monera into 2 more categories, while the rest of the eukaryotes remain in the third category.

It separates the prokaryotes into two more groups; eubacteria (bacteria) and archaebacteria (archaea).

It is also known as the 6 kingdom system of classification. 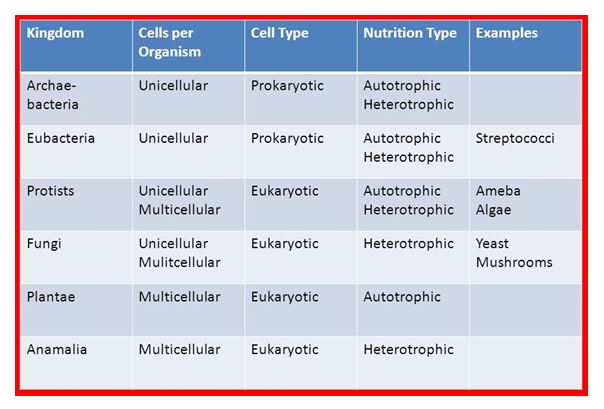