In 1852, a Scottish chemist named Robert Angus Smith discovered that there was some relationship between the pollution in the atmosphere and the acidic rainfall witnessed in Manchester, England. However, the issue was not taken seriously until 1972 when a New York Times article published a report on the effects of climate change, from the occurrence of acid rain in the Hubbard Brook Experimental Forest in New Hampshire. To be better prepared for its adverse effects, we must first acquaint ourselves with the causes of acid rain.

Acid rain is caused by the pollutants in the air. Our cars and various industrial processes emit carbon, which influences the level of acidity in rainfall, causing acid rain. To determine acidity, we check the pH level of water droplets. On average, rainwater is moderately acidic, ranging between 5.3-6.0 on the pH scale, because carbon dioxide in the air mingles with water to create carbonic acid. While this level of acidity is tolerable, when the pH drops below this amount, it is considered acid rain. When gases in the atmosphere react with the water molecules and oxygen, acidic chemical compounds form sulfuric and nitric acid.

In some cases, volcanic eruptions can also become one of the major causes of acid rain, the burning of fossil fuels, carbon emission from factories and automobiles being other causes. The acid in the rain may cause buildings to wear out, corrode metals, or even peel paint off surfaces.

In the northeast of the United States, most of Europe, southeast Canada, as well as parts of Sweden, Norway, and Germany, acid deposition has been found in large amounts. Some smaller but significant amounts of acid deposition have also been seen in South Africa, Sri Lanka, Southern India, and parts of South Asia.

In parts of the world where the weather is wet, the wind may blow acidic chemicals into the air, causing the formation of rain, sleet, fog, snow, or mist. This causes acid to be removed from the atmosphere and its deposition into the earth’s surface. The flow of this acid through the earth’s surface is highly detrimental to plant life, animals, and aquatic creatures. If acid collects in drains, the water then flows into rivers and canals, mixing with the sea water and affecting marine life.

In other parts of the world, where the climate is dry, acidic chemicals from the air can form smoke or fall to the ground as dry particles. These particles can stick to cars, houses, trees, buildings, and other surfaces, and can be corrosive in the long run. However, these acidic pollutants may be washed away from the surface of the earth during rainstorms.

What is Acid Rain caused by?

As mentioned before, volcanic eruptions can be a natural cause of acid rain, due to the emission of acid-producing gases. Forest fires or wildfires, decaying vegetation, and biological processes that occur in the environment can also cause acid to deposited and eventually translate to acid rain. In some cases, when lightning strikes, nitric oxide is naturally produced, which reacts with water molecules in the air, producing nitric acid, and contributing to acid rain.

Our day to day activities as well as organizational activities causes great impact on the environment. Factories, power generation facilities, and automobiles, all emit sulfur and nitrogen gas into the atmosphere, which results in acid rain. The use of coal for electrical power generation is one of the biggest factors resulting in acid rain causing gaseous emissions.

Furthermore, since factories and automobiles run on a regular basis, they release high amounts of pollutants into the atmosphere. These gases are particularly concentrated in industrialized areas and urban regions, where the number of factories and cars are higher. These areas, then, are also more likely to experience acid rain than other parts of the world.

Acid rain can negatively impact aquatic environments when acidic pollutants from the environment flow into water bodies. Generally, aquatic creatures require a pH of about 4.8 to survive, but when the pH balance falls below that amount, it can become dangerous for sea creatures. 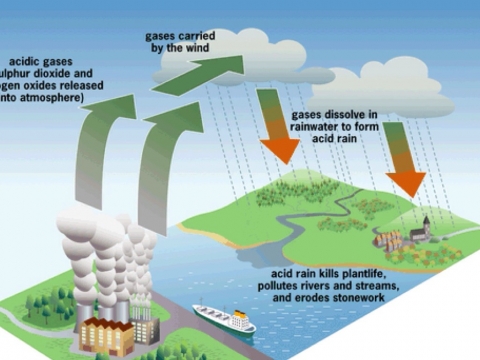