This article has been written by Mr. Prashant Bhattacharji from The Learning Point.

Accurate assessments in high-school examinations are important, not just because those scores are indicator of an individual student’s accomplishments and ability,  but also because those scores when aggregated, are a metric to track teaching standards and learning outcomes in schools across the country. Examinations and assessments need to be repeatable and reliable over a period of time. For example, it should not be significantly easier (or more difficult) to score 90 in the Class 12 Mathematics paper, five years from now – than it is currently. 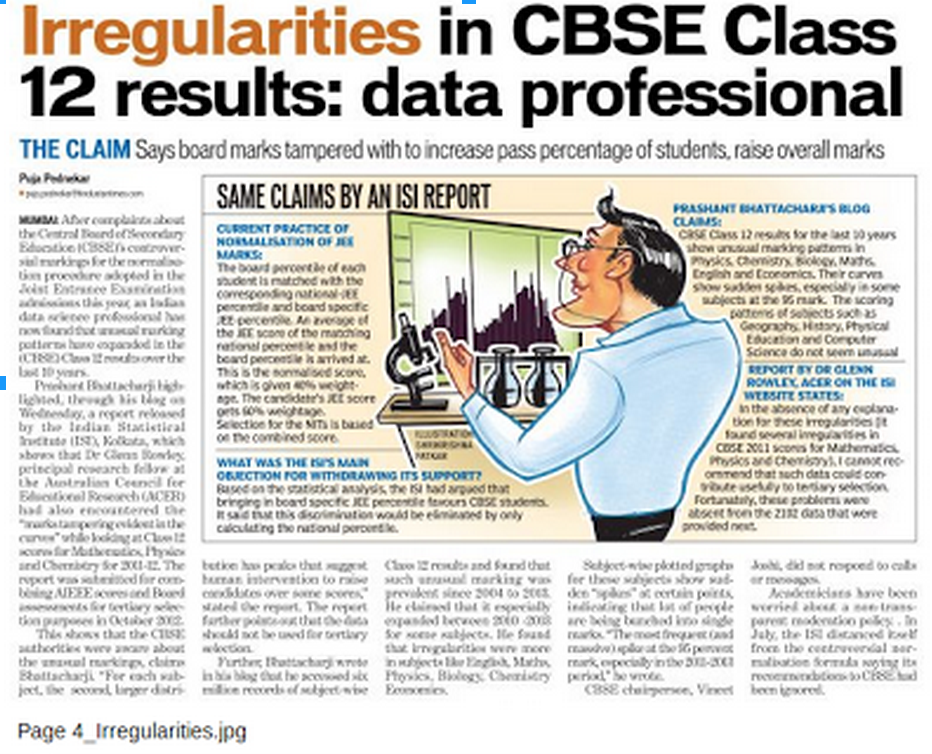 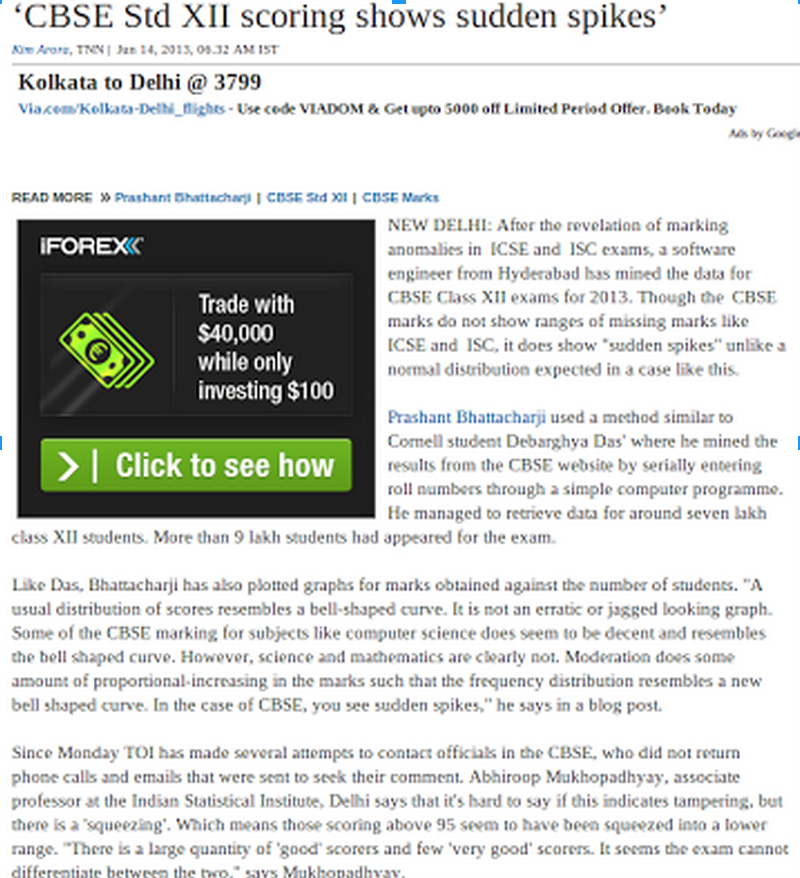 A few years ago, I had mined the board exam result data from both the CBSE and ICSE and written two articles describing how both the boards were manipulating marks arbitrarily and inflating both scores and pass rates. I had analyzed more than ten years of CBSE scoring data and had presented sufficient evidence to suggest that scores were being tampered. It is not necessarily good, even for those scoring very high marks, because the relative ordering of candidates is likely to be distorted in this kind of an upwards-scaling process done improperly – which could even bring down your percentile ranking – which now determines admission to a variety of tech colleges.

Exposing CBSE and ICSE: Statistical Insights into the True Lies on your Marksheets
A Shocking Story of Marks Tampering: Data Mining CBSE Scoring curves for the last 10 years

Usually, the histogram of scores taken by a large number of students is expected to approximately resemble a bell curve. This isn’t to suggest that it will be a perfect normal or poisson distribution, but something which resembles one of those – for the most part, quite a smooth curve, with a hump. Depending on the difficulty of the test or the assessment scheme, the curve will have a long tail (and skew) to either the left or right side; plus there is likely to be some level of abruptness near grade boundaries and perhaps ‘mixtures’, keeping in mind a margin of error. For example – if the pass mark is 40 or 50, it is likely that candidates a couple of marks short of the pass mark will have their score promoted to it (the pass mark) keeping in mind a possible margin of error.

The Shady Practice of ‘Score Moderation’

Dr. Sanghi, Computer Science professor at IIT Kanpur, wrote on this issue a few years ago.

It is okay if the exam board makes slight changes to the raw score assigned by a script-marker to a candidate, in a particular subject.

Slight upscaling or downscaling of marks is fine – to take into account the fact that a question paper might be significantly harder than the previous years, or the fact, that some script-markers might be more strict/liberal than the rest – which is why slight changes are permissible.

Fitting the scores to a standardized curve is fine as well. But, what the scoring histograms suggest, is not minor or marginal changes, but gross distortions to the original scores – and a blatant misreporting of data, by inflation of pass-rates. Also, the score distributions are changing year to year, which reduces the reliability and repeatability of these examinations.

Their scoring patterns are the most distorted of the lot. 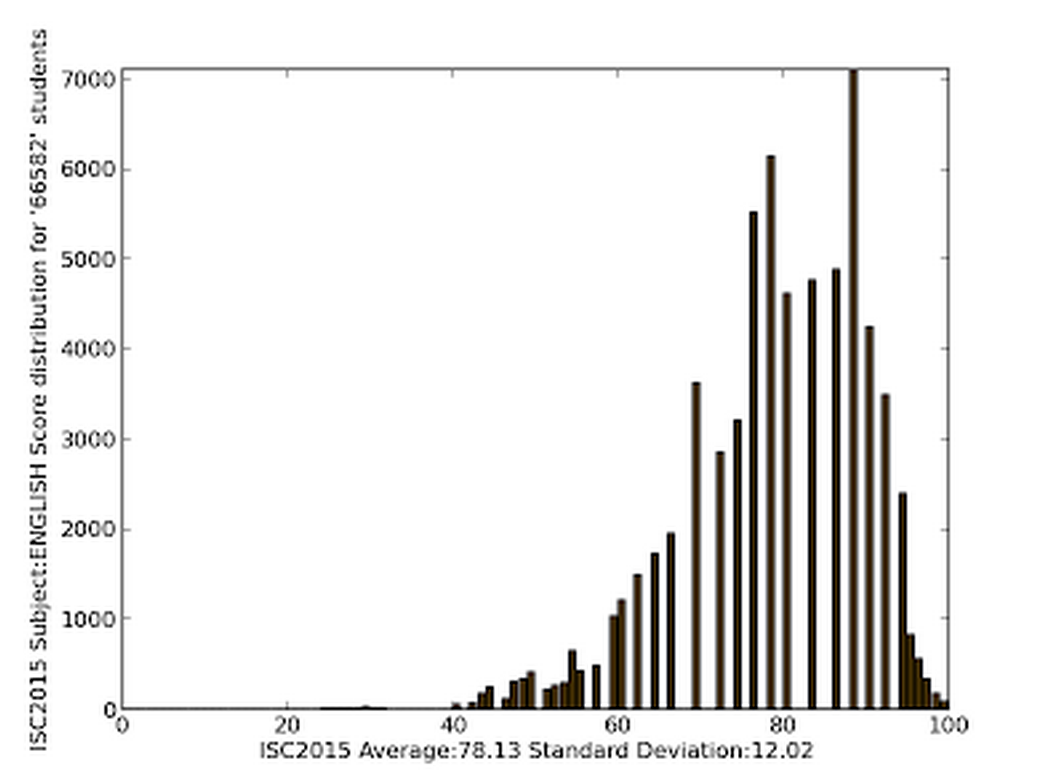 1. The “Missing Marks” Computer Bug(?) in their result processing software.

As has been pointed out on several occasions earlier, specially after a popular blog post went viral in 2013, there seems to be a very serious bug in their result generation software, which causes entire ranges of marks to vanish in the final result of the board. These missing marks are the holes or the gaps you see in the histogram above.

For example, no one in the entire country, has scored 81, 82, 84, 85, 87, 89 in ANY subject at the ICSE or the ISC examination for several years. This issue has been there for at least, the last 18 years, if you look at the comments under the article. These are the marks which have never been attained by anyone at the ICSE or ISC examination.

This holds true for 2015 data as well. That the board has offered no explanation despite mass media coverage of the issue in the past, given an insight into the level of competence and accountability of those who run an important exam board.

2. Their pass rates have clearly been inflated.

I analyzed data for approximately 68k students out of the the 71.5k candidates who took the ISC-2015 examinations.

Attached are the histograms for Mathematics, Computers and English respectively.

Almost everyone has passed in English.

In the Mathematics examination, no one has scored between 27 and 40 – clearly the board has been very generous and has given as much as 12-13 grace marks.

If you submitted anything other than a blank answer sheet, you should pass!

The score in Computer Science again, is a very abnormal distribution – the most popular score in the examination is 100/100! 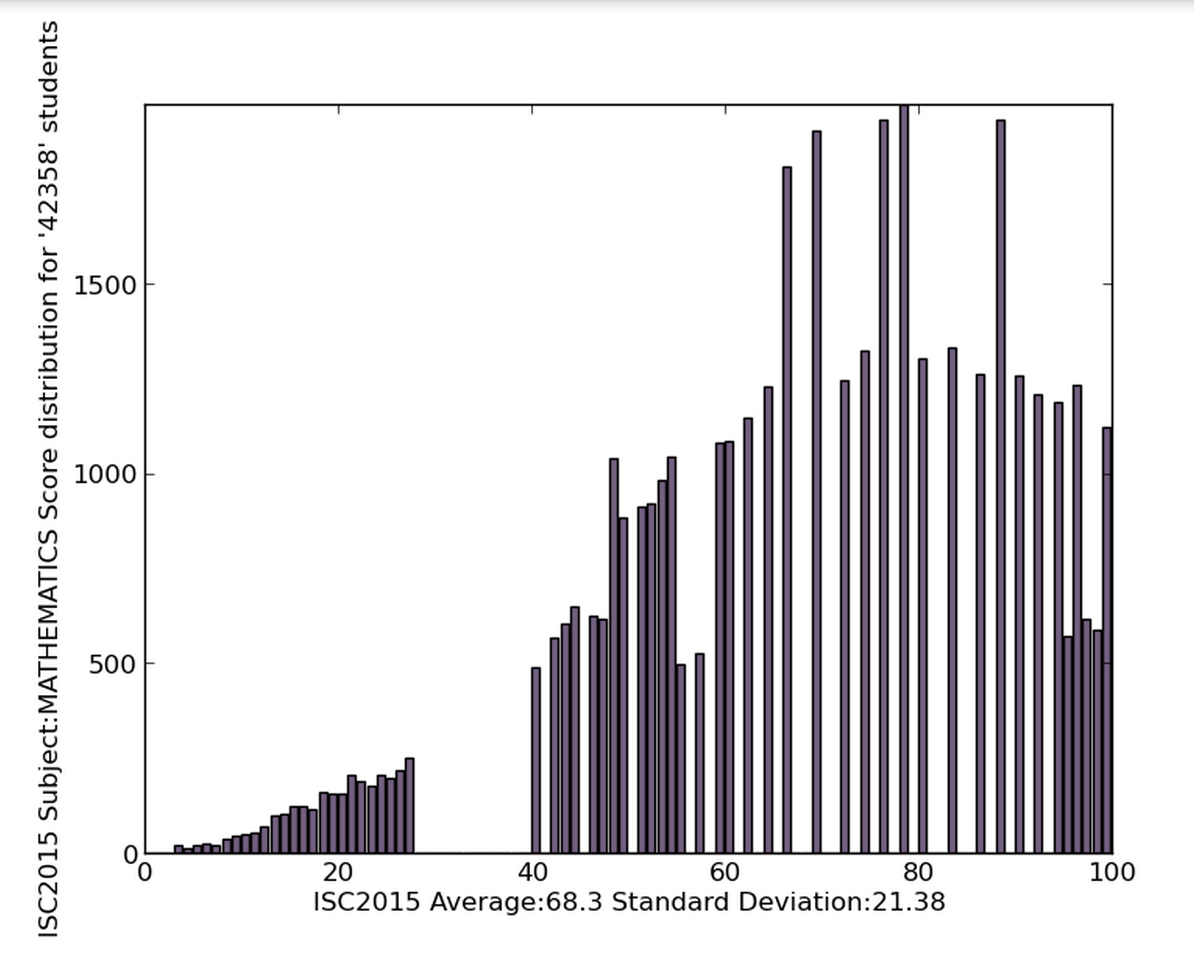 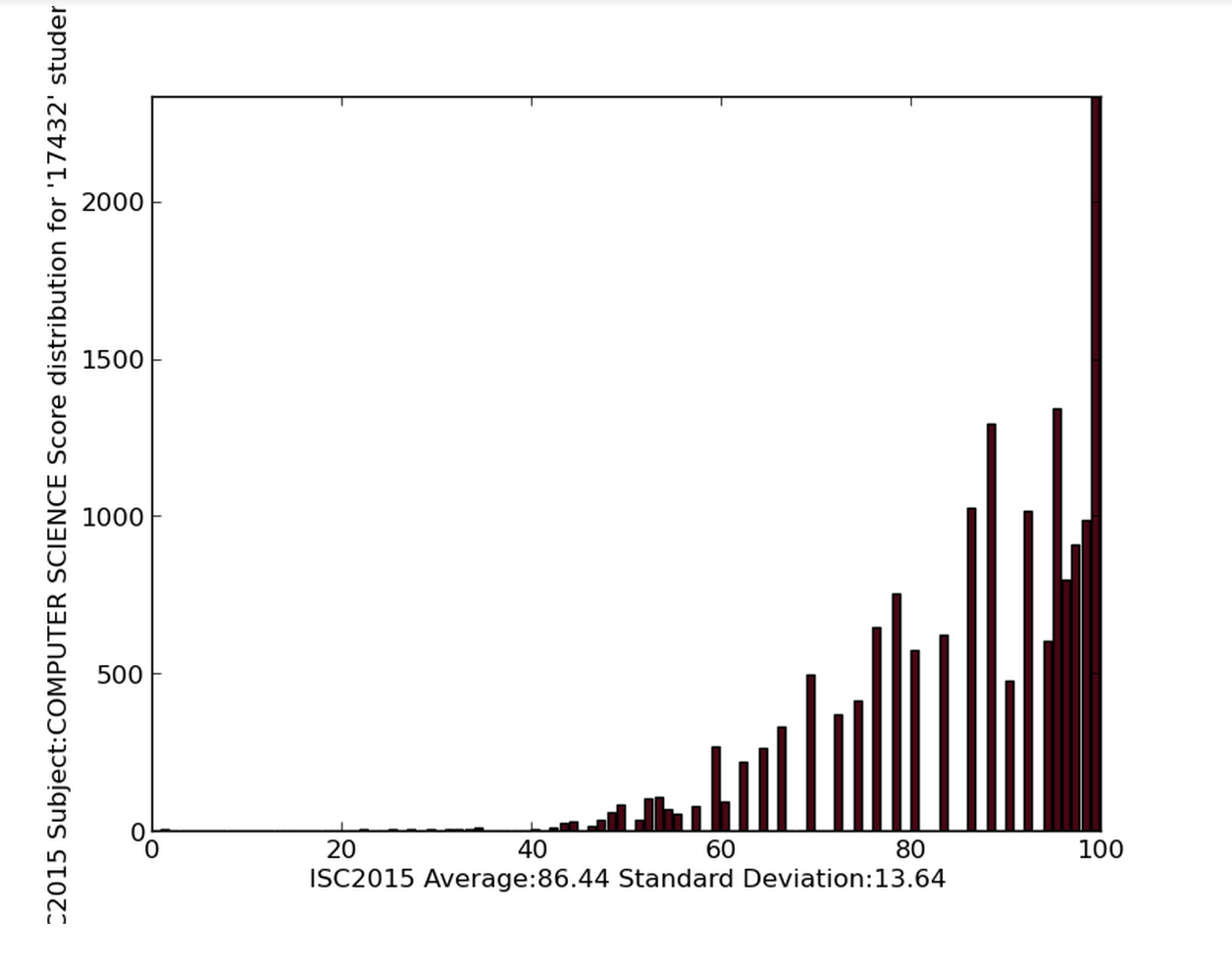 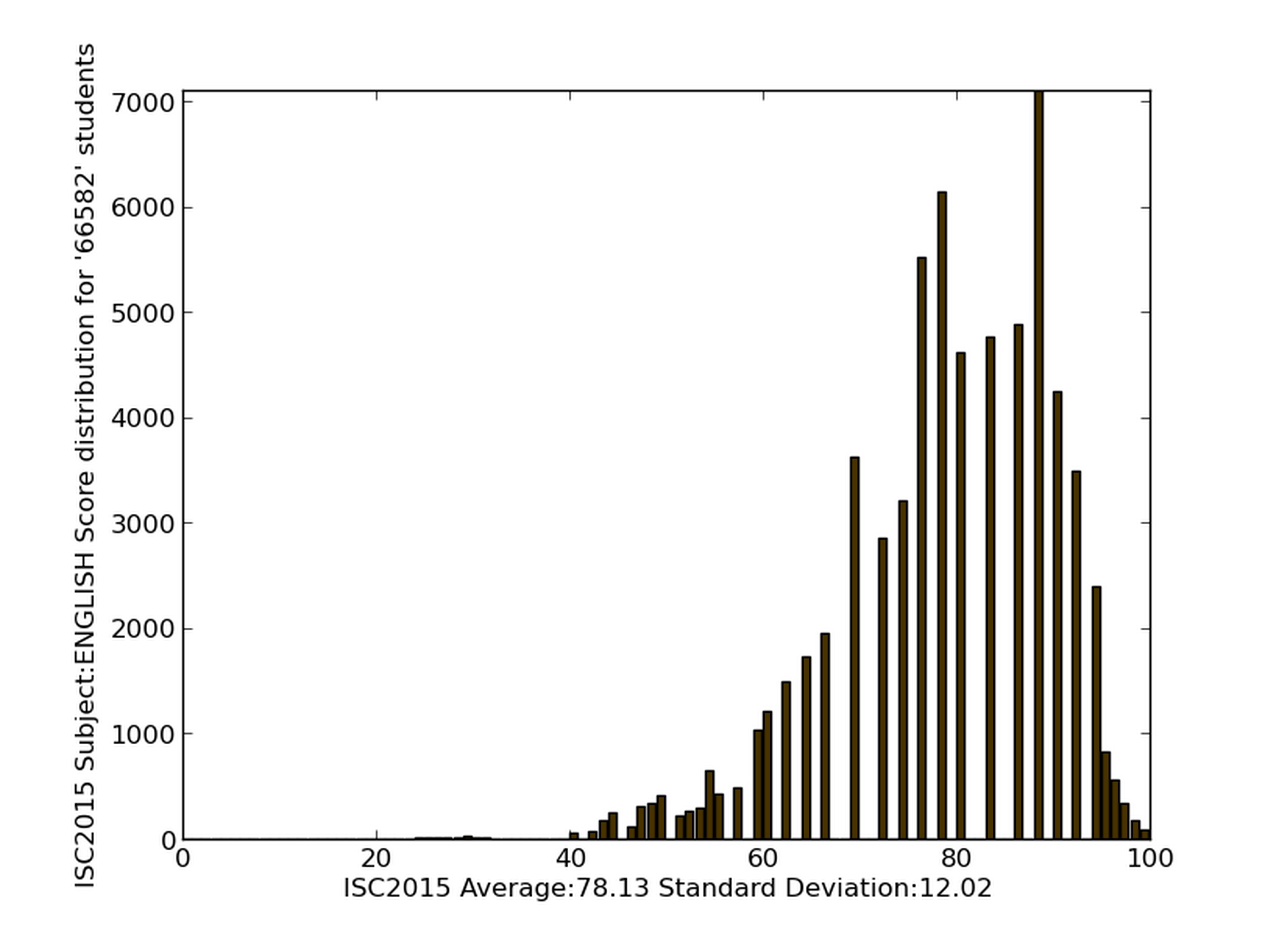 This data for 2015, was inspected for the results of over 3.5 lakh students who took the exam.

1. Once again, we see a clear attempt to inflate pass rates by adding even as much as fifteen grace marks. Notice the gaps in the scoring histograms, generally between 20 and 35 or so. 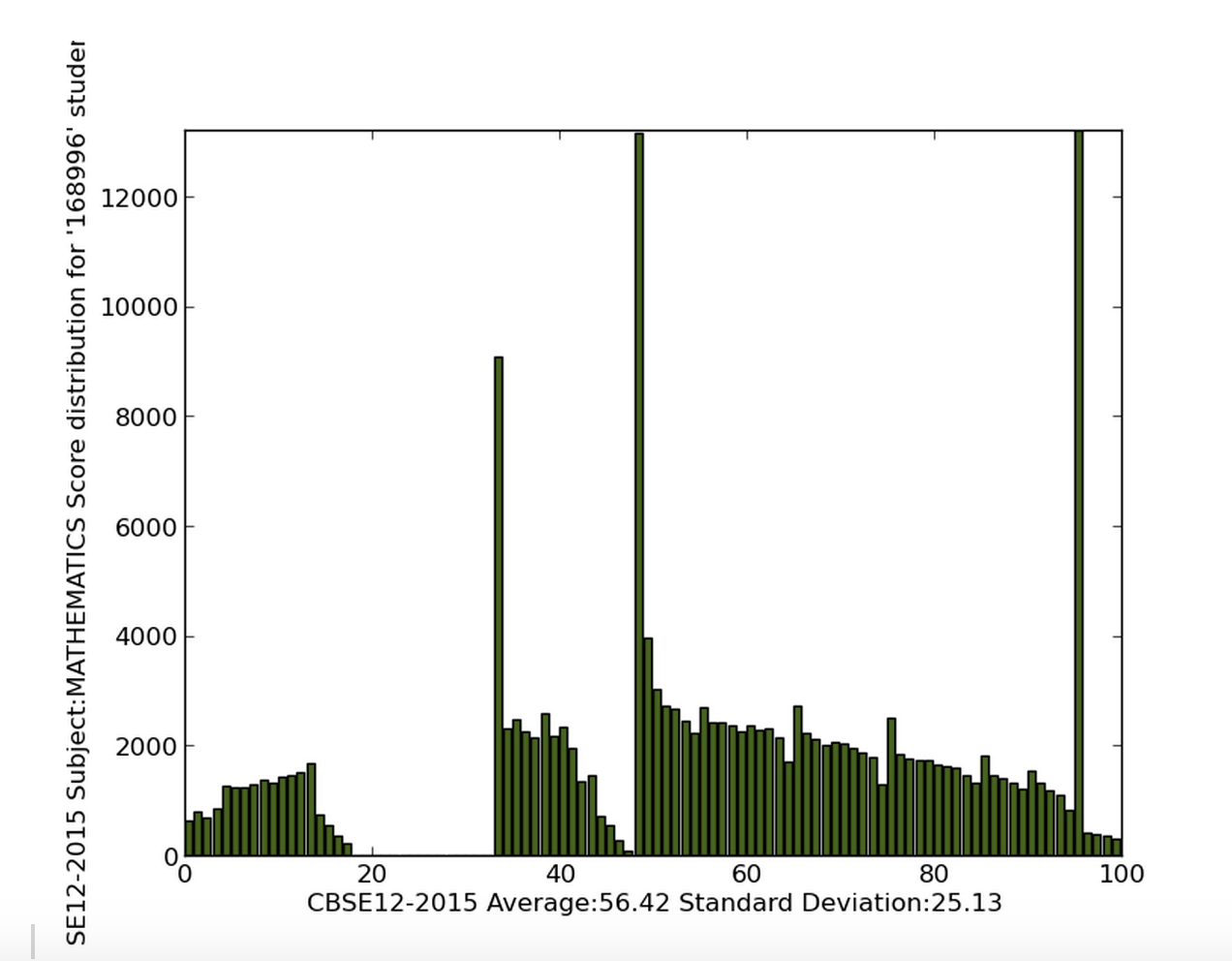 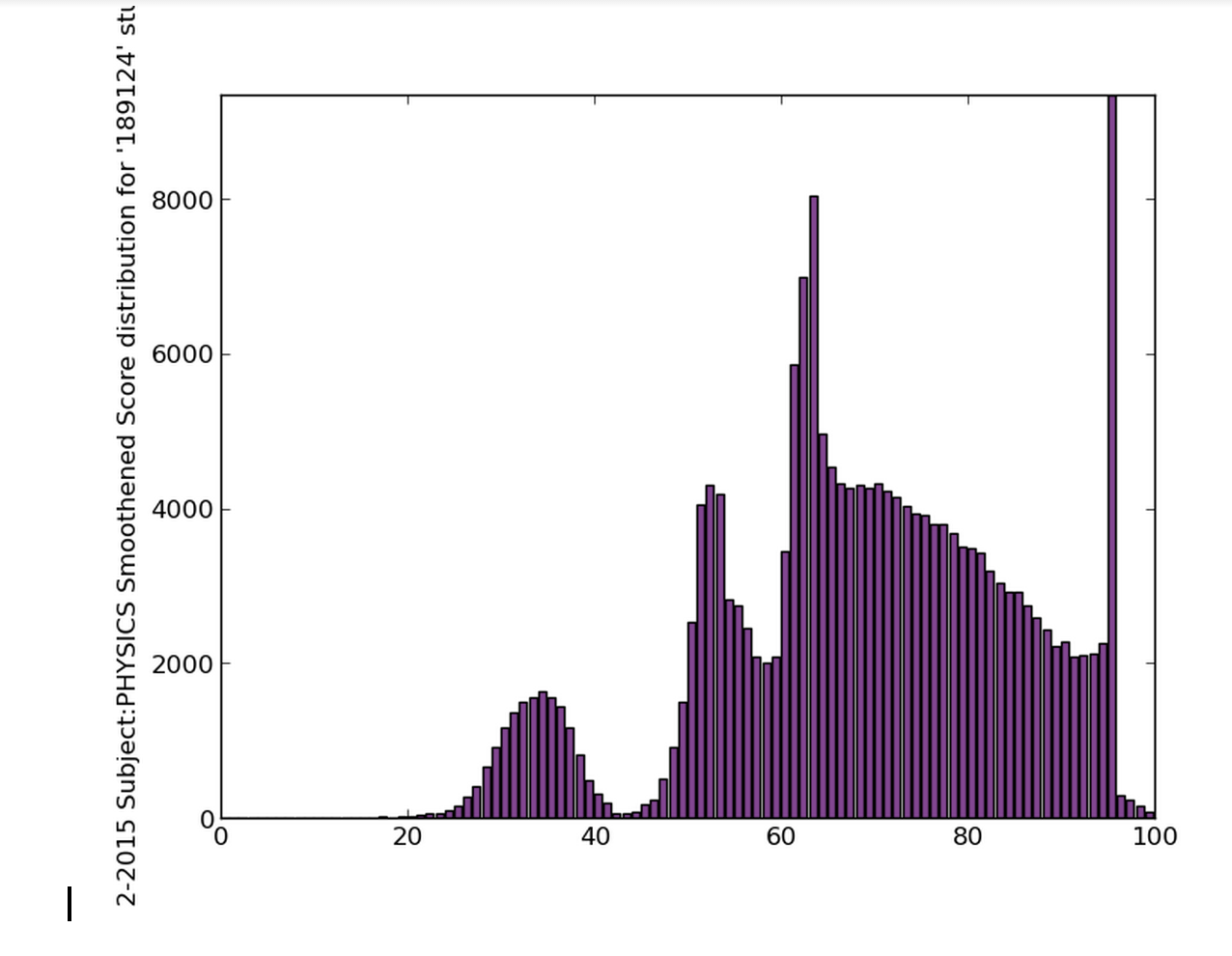 2. The scoring curves, once again, contain erratic spikes, and they do not resemble any recognizable distribution of exam scores. One can only suspect that some very arbitrary up-scaling and inflation is happening and it is unlikely that the relative ordering (ranking) of students can remain the same, when a very large number of students are being squeezed into exactly the same score (specially at the mark of 95).

3. The last thing observed in the CBSE scores, is that almost everyone has been assigned practical marks very generously. Candidates with less than 50% in the theory paper, have 90% or more marks in the practical examination!

The consequences of such score manipulation