Concept of an Ecosystem 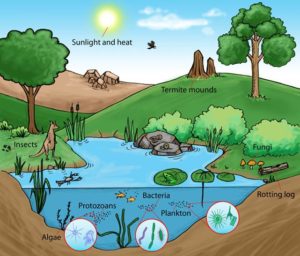 Living organisms cannot live isolated from their non-living environment be­cause the latter provides materials and energy for the survival of the former i.e. there is an interaction between a biotic community and its environment to produce a stable system; a natural self-sufficient unit which is known as an ecosystem.

An ecosystem, therefore includes all of the living things (plants, animals and organisms) in a given area, interacting with each other, and also with their non-living environments (weather, earth, sun, soil, climate, atmosphere). A pond, lake, desert, grassland, meadow, forest etc. are common examples of ecosystems. Ecosystems are the foundations of the Biosphere and they determine the health of the entire earth system.

This very complex, but wonderful interaction of living things and their environment, has been the foundations of energy flow and recycling of carbon and nitrogen

Anytime a ‘stranger’ (living thing(s) or an external factor such as rise in temperature) is introduced to an ecosystem, it can be disastrous to that ecosystem. This is because the new organism (or factor) can distort the natural balance of the interaction and potentially harm or destroy the ecosystem.

Usually, biotic members of an ecosystem, together with their abiotic factors depend on each other. This means the absence of one member or one abiotic factor can affect all parties of the ecosystem.

Structure and Function of an Ecosystem

Each ecosystem has two main components:

The functions of important factors in abiotic components are given below:

Soils are much more complex than simple sediments. They contain a mixture of weathered rock fragments, highly altered soil mineral particles, organic mat­ter, and living organisms. Soils provide nutrients, water, a home, and a struc­tural growing medium for organisms. The vegetation found growing on top of a soil is closely linked to this component of an ecosystem through nutrient cycling.

The atmosphere provides organisms found within ecosystems with carbon di­oxide for photosynthesis and oxygen for respiration. The processes of evapora­tion, transpiration and precipitation cycle water between the atmosphere and the Earth’s surface.

Solar radiation is used in ecosystems to heat the atmosphere and to evapo­rate and transpire water into the atmosphere. Sunlight is also necessary for photosynthesis. Photosynthesis provides the energy for plant growth and me­tabolism and the organic food for other forms of life.

Most living tissue is composed of a very high percentage of water, up to and even exceeding 90%. The protoplasm of a very few cells can survive if their water content drops below 10%, and most are killed if it is less than 30-50%.

Water is the medium by which mineral nutrients enter and are trans-located in plants. It is also necessary for the maintenance of leaf turgidity and is required for photosynthetic chemical reactions. Plants and animals receive their water from the Earth’s surface and soil. The original source of this water is precipita­tion from the atmosphere.

On the basis of their role in the ecosystem the biotic components can be classi­fied into three main groups:

The consumers are of four types, namely:

These are the animals which feed on plants or the producers. They are called her­bivores. Examples are rabbit, deer, goat, cattle etc.

The animals which feed on the herbivores are called the pri­mary carnivores. Examples are cats, foxes, snakes etc.

These are the large carnivores which feed on the secondary consumers. Example are Wolves.

These are the largest carnivores which feed on the tertiary consumers and are not eaten up by any other animal. Examples are lions and tigers.

Hope this provides you a sufficient information about our ecosystem. To read more such stuff, visit Toppr.com