What is an Ecosystem?

Just imagine an ecosystem as a tiny world within our world. It includes all of the living things (plants, animals, and organisms which is biodiversity) in a given area, interacting with each other, and also with their non-living environments (weather, earth, the sun, soil, climate, atmosphere). Every portion of the ecosystem influences everything else. An ecosystem exists within a larger area called a biome. 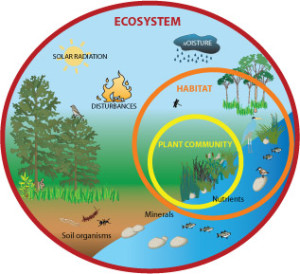 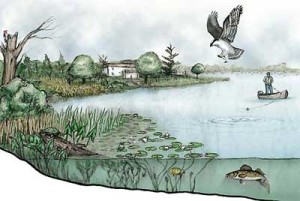 Consider a small puddle at the back of your home. In it, you may find all kinds of living things, right from microorganisms to insects and plants. These may depend on non-living things like water, sunlight, turbulence in the puddle, temperature, atmospheric pressure and even nutrients in the water for life.

This very complex, the wonderful interaction of living things and their environment, has been the foundations of energy flow and recycling of carbon and nitrogen.

So, the moment a ‘stranger’ (living thing(s) or external factors such as a rise in temperature or floods) is introduced to an ecosystem, it can be devastating to that ecosystem. This is because the new organism (or factor) can disturb the natural balance of the interaction and potentially harm or destroy the ecosystem.

The Sonoran Desert in Arizona is a harsh landscape. But within the desert, there are streams and creeks, where creatures like fish, birds, turtles, and snakes live. There are trees and plants as well. So, this is one type of an ecosystem. However, in other parts of the desert, there is little water. Here, only a few plants, such as cactus can survive. The animals that live here – snakes, ground rats, and scorpions – must adapt to harsh conditions. This is a different ecosystem within the same biome.

Ecosystems do come in different sizes. They can survive in a small area such as underneath a rock, a decaying tree trunk, or a pond in your village, or it can exist in large forms such as an entire rainforest. Technically, the Earth can be called a huge ecosystem.

Ecosystems can be put into two groups. If the ecosystem exists in a water body, like an ocean, freshwater or puddle, it is called an aquatic ecosystem. Those that exist outside of water bodies are called terrestrial ecosystems.

A small-scale ecosystem such as a pond, puddle, tree trunk, under a rock, etc.

A medium scale ecosystem such as a forest or a large lake.

A very large ecosystem or collection of ecosystems with similar biotic and abiotic factors such as an entire ‘Rainforest’ with millions of animals and trees, with many different water bodies running through them.

We need to understand that the Ecosystem boundaries are not marked (separated) by rigid lines.  They are often separated by geographical barriers such as deserts, mountains, oceans, lakes, and rivers. As these borders are never rigid, ecosystems tend to blend into each other. This is why a lake can have many small ecosystems with their own unique characteristics. Scientists call this blending “ecotone.”

The major source of energy for every ecosystem is the sun. Solar energy is converted into chemical energy by organisms known as producers. Producers make the carbon-based molecules, usually carbohydrates, that the rest of the organisms in the ecosystem, including you, consume. Producers include all of the green plants and some bacteria and algae.

As human populations and per capita consumption grow, so do the resource demands imposed on ecosystems and the effects of the human ecological footprint. Natural resources are vulnerable and limited. The environmental impacts of anthropogenic actions are becoming more apparent. Problems for all ecosystems include: environmental pollution, climate change and biodiversity loss. For terrestrial ecosystems further threats include air pollution, soil degradation, and deforestation. For aquatic ecosystems threats include also unsustainable exploitation of marine resources (for example overfishing of certain species), marine pollution, microplastics pollution, water pollution, and building on coastal areas.

Society is increasingly becoming aware that ecosystem services are not only limited but also that they are threatened by human activities. The need to better consider long-term ecosystem health and its role in enabling human habitation and economic activity is urgent. To help inform decision-makers, many ecosystem services are being assigned economic values, often based on the cost of replacement with anthropogenic alternatives. The ongoing challenge of prescribing economic value to nature, for example through biodiversity banking, is prompting transdisciplinary shifts in how we recognize and manage the environment, social responsibility, business opportunities, and our future as a species.

There are very many types of ecosystems out there, but the three major classes of ecosystems, sometimes referred to as ‘biomes’, which are relatively contained, are the following:

These can then be broken up into smaller ecosystems. For instance, in the freshwater ecosystems we find:

These sorts of ecosystems can also include birds because birds often hunt in and around water for small fish or insects.

As is clear from the title, freshwater ecosystems are those that are contained to freshwater environments. This includes, but is not limited to, ponds, rivers and other waterways that are not the sea (which is, of course, saltwater and cannot support freshwater creatures for very long). Freshwater ecosystems are actually the smallest of the three major classes of ecosystems, accounting for just 1.8% of the total of the Earth’s surface. The ecosystems of freshwater systems include relatively small fish (bigger fish are usually found in the sea), amphibians (such as frogs, toads and newts), insects of various sorts and, of course, plants. The absolutely smallest living part of the food web of these sorts of ecosystems is plankton, a small organism that is often eaten by fish and other small creatures.

Rainforests – Rainforests usually have extremely dense ecosystems because there are so many different types of animals all living in a very small area.

Tundra – As mentioned above, tundra usually have relatively simple ecosystems because of the limited amount of life that can be supported in these harsh conditions.

Savannas – These differ from deserts because of the amount of rain that they get each year. Whereas deserts get only a tiny amount of precipitation every tea, savannas tend to be a bit wetter which is better for supporting more life.

Forests – There are many different types of forests all over the world including deciduous forests and coniferous forests. These can support a lot of life and can have very complex ecosystems.

Grasslands – Grasslands support a wide variety of life and can have very complex and involved ecosystems.

Since there are so many different types of terrestrial ecosystems, it can be difficult to make generalizations that cover them all.

Because terrestrial ecosystems are so diverse, it is difficult to make generalizations about them. However, a few things are true almost all of the time. For instance, most contain herbivores that eat plants (that get their sustenance from the sun and the soil) and all have carnivores that eat herbivores and other carnivores. Some places, such the poles, contain mainly carnivores because not plant life grows. A lot of animals and plants that grow and live in terrestrial ecosystems also interact with freshwater and sometimes even ocean ecosystems.

Ocean ecosystems are relatively contained, although they, like freshwater ecosystems, also include certain birds that hunt for fish and insects close to the ocean’s surface. There are different sorts of ocean ecosystems:

Shallow water – Some tiny fish and coral only live in the shallow waters close to land.

Deep water – Big and even gigantic creatures can live deep in the waters of the oceans. Some of the strangest creatures in the world live right at the bottom of the sea.

Warm water – Warmer waters, such as those of the Pacific Ocean, contain some of the most impressive and intricate ecosystems in the world.

Cold water – Less diverse, cold waters still support relatively complex ecosystems. Plankton usually form the base of the food chain, following by small fish that are either eaten by bigger fish or by other creatures such as seals or penguins.

Ocean ecosystems are amongst some of the most interesting in the world, especially in warm waters such as those of the Pacific Ocean. This is not least because around 75% of the Earth is covered by the sea, which means that there is lots of space for all sorts of different creatures to live and thrive. There are actually three different types of oceanic ecosystems: shallow waters, deep waters and the deep ocean surface. In two of these the very base of the food chain is plankton, just as it is in freshwater ecosystems.

These plankton and other plants that grow in the ocean close to the surface are responsible for 40% of all photosynthesis that occurs on Earth. From this there are herbivorous creatures that eat the plankton, such as shrimp, that are then themselves usually eaten by bigger creatures, particularly fish. Interesting, in the deep ocean, plankton cannot exist because photosynthesis cannot occur since light cannot penetrate that far into the ocean’s depths. Down in the deepest depths of the ocean, therefore, creatures have adapted very strangely and are amongst some of the most fascination and the most terrifying and intriguing living creatures on Earth.

If you actually start thinking about this, you’ll realize that the ecosystems might exist in your neighborhood or even in your own yard. If you have a vegetable garden, the plants attract plant-eating insects. The insects attract birds, snakes, and frogs. These animals might attract predators, including fox, raccoons, coyotes, and owls.

Woah! Who knew there was so much going on right outside your door! A vegetable garden is a man-made ecosystem, but you get the idea, right?

Hope you enjoyed reading this article and learned a thing or two. If you have any questions about ecosystems, don’t hesitate to leave your comments below. We’d be glad to answer your queries.

For more such articles, keep following us at Toppr.