Electrochemistry is defined as that branch of chemistry which deals with the study of the production of electricity from the energy that is released during spontaneous chemical reactions and the use of electrical energy to bring about non-spontaneous chemical transformations. The study of Electrochemistry in Class 12 is extremely crucial. Let us rundown on what it is, and what is its significance.

The diagram of the electrochemical cell is given below: 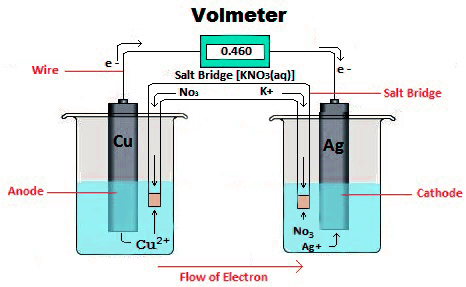 This kind of electrochemical cell functions by changing the chemical energy into electrical energy. There are two compartments which contain an electrode that is submerged in the electrolyte.

That cell which is responsible for the conversion of chemical energy culminating out of spontaneous redox reactions – into electrical energy is an electrochemical cell known as voltaic or galvanic cell. It is the Gibbs energy of spontaneous redox reaction that triggers the electrical work done by the galvanic cell. The cell consists of two half cells and a salt bridge. The half cell which is metal electrodes is dipped in an electrolyte. These two half cells connect with each other through a voltmeter as well as a switch in an external manner with the assistance of metallic wires. Whenever the both these electrodes are dipped in the same solution, the salt bridge is not required.

Electrode potential is the difference that develops between the electrode and electrolyte. When an equilibrium condition exists, then charge separation is observed depending on the tendency of the two opposing reactions. The electrode could be positively charged or negatively charged.

The electrode on which oxidation takes place is known as the anode. With respect to the solution, the anode has a negative potential.

The electrode at which reduction takes place is known as the cathode. With respect to the solution, the cathode has a positive potential.

Cell potential is the difference between the positive and negative potentials. It is also known as the electromotive force of galvanic cell.

The electromotive force is, therefore, the maximum potential difference that exists between the two electrodes of a galvanic cell.

There are certain rules that need to be adhered to when representing an electrochemical cell. The cathode is always on the right side and the anode is on the left side. The rule that is followed is that the metals are written first and thereafter the metal ions that are present in the electrolyte. They need to be separated by a vertical line. The molar concentration is written next to it within brackets. Eg. A Daniel cell can be represented as Zn | Zn2+ || Cu2+ | Cu

The cell notation for the same will be

It is an equation that related to the reduction in the potential of an electrochemical reaction. It was formulated by German physical chemist Walther Nernst.

For a general electrochemical reaction:

Nernst Equation is given by

Write the Nernst equation and emf of the following cells at 298 K:

(i) For the given reaction, the Nernst equation can be given as:

(ii) For the given reaction, the Nernst equation can be given as:

(iii) For the given reaction, the Nernst equation can be given as:

(iv) For the given reaction, the Nernst equation can be given as:

Also check out our article on How To Study For Chemistry For Class 12? here.