We learnt in Physics that there are 4 fundamental forces in nature: the gravitational force, the weak and strong nuclear forces and one another similar force. This particular force, just like the other three, plays a crucial role in our existence and without it, we would still be living in the dark primitive society while hunting to kill animals and struggling to live. But not just that, it also has two facets to it: just look at what is lighting up your screen, imagine the source of it and you’ll realize the first face; while thinking of a compass and you’ll immediately know what the second face is all about.

Electricity and magnetism are two of the most important landmarks of the modern world. They themselves form intricate complex webs of theory, which are still being probed by the scientists across the world for uncovering their secrets. But what if we told you that there is a ‘queen bee’ in these intricate complex webs akin to the ‘hive’, that actually controls all the cogs in the machine. That is exactly what electromagnetism is! This also resembles the very famous ‘chicken and egg’ problem, whenever the question is asked about “which came first”. But it can be safely said that electromagnetism encompasses all the phenomenon of both electricity and magnetism, as accidentally discovered by both Henry Oersted and Michael Faraday independently, that both the electricity and the magnetism are dependent on each other.

Henry Oersted while teaching in his class once, observed that a battery connected to a wire caused deflection in a magnetic compass placed beside. Taking this forward, Faraday sought to prove the opposite relationship and found that changing the magnetic field through a wire indeed produced current. These two basic experiments established a base, upon which a majority of the modern world is dependent.

Electrodynamics is creating a magnetic field from an electric current.

When DC electricity is passed through a wire, a magnetic field rotates around the wire in a specific direction.

Electromagnetism around a Loop

Now we are ready to understand the concept of Electromagnetism around a Loop.

The resulting lines of force generated by the current flowing through the loop oppose each other in the space between the two conductors where the two like poles meet thereby deforming the lines of force around each conductor. However, as the conductors cannot move, the two magnetic fields, therefore, help each other by generating a north and a south pole along this line of interaction. This results in the magnetic field are strongest in the middle between the two conductors. The intensity of the magnetic field around the conductor is proportional to the distance from the conductor and by the amount of current flowing through it.

The magnetic field generated around a straight length of current-carrying wire is very weak even with a high current passing through it. However, if several loops of the wire are wound together along the same axis producing a coil of wire, the resultant magnetic field will become even more concentrated and stronger than that of just a single loop. This produces an electromagnetic coil more commonly called a Solenoid.

Likewise, when a changing magnetic field affects a metal wire, the current is changed. One application is to change the electrical voltage, through the use of a transformer.

Explanation with an Example

Permanent Magnetic speakers commonly used in TV’s and Radios are perfect examples of Electromagnetic devices. Let’s see the operation of these devices which are based on the principle of electromagnetism. See the picture below. 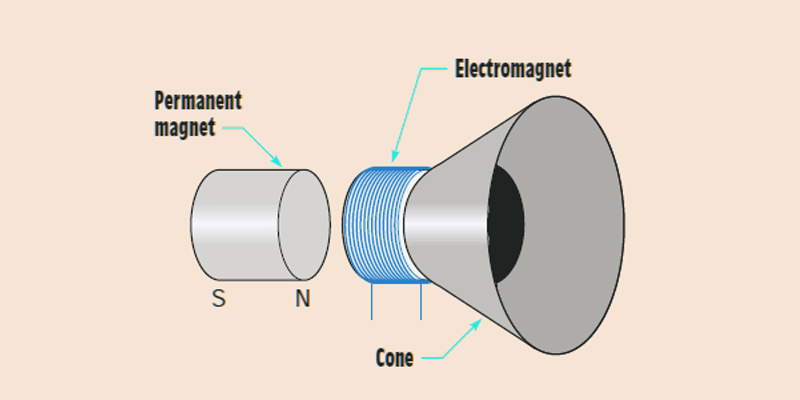 Generally, the question about the importance of learning about a fundamental force of nature shouldn’t arise at all. But in case it does, let’s stock your arsenal with some mind-blowing effects of this amazing phenomenon as explained follows.

This innovative marvel which made the transportation of electricity possible between any two corners of the world, has its working principle directly based on electromagnetism. First, a current produces a magnetic field, which subsequently produces another current. This can be used either to step-up or to step-down voltages to the required levels. For example, to transfer currents over a long distance, you are required to send high voltages of electricity from the generating station, which can then be stepped down to required low levels using a transformer once it reaches the destination.

Wondering why this came up here? Hasn’t the light always existed around us and over the centuries scientists must have figured out what light is, right? Well, not completely. It was not until the discovery of electromagnetism, that scientists completely understood the existence of light, or the fact that this light is an electromagnetic wave which could move freely through space, unlike the sound waves. From this, the concept of polarisation was born and science progressed further in that direction. And likewise, there couldn’t have been any theory of relativity without the true understanding of light, so maybe electromagnetism also has the credit of showing Einsteins theory to the world, isn’t it?

Radio Waves and the Electromagnetic Spectrum

This could be treated as a subset of something called the electromagnetic spectrum, of which light is a part too. But what sets this field apart is the extensive usage of radio waves. Back when the concept of electromagnetism was still being theorised and the nature of light was still being debated, a brilliant scientist called Heinrich Hertz proved the existence of radio waves and there has been no looking back since then. There is no dearth of applications using these radio waves now: from the ever pleasing entertainment radio stations to the highly secured army communications, it has got everything covered. Also, several other parts of this electromagnetic spectrum, like the infrared waves, have also found a way into usage.

The European Organisation for Nuclear Research, best known for operating the world’s largest particle accelerator, The Large Hadron Collider (LHC) as well as for its path-breaking experiments in the hope of finding out more about the origins of our universe; is also extensively dependent on electromagnetism. It has set up large magnets in its premises that create magnetic fields much stronger than that of Earth’s magnetic field, that provide the ideal environment for simulating the collisions between fundamental particles like the electrons and protons.

The Maglev train or the Magnetic Levitation Train, at first seems like the fantasy of a fiction writer. But it actually exists. It is a train that literally has no wheels and runs purely on magnetic levitation. And while doing so, it can achieve blazing high speeds of up to 600 km/h, with a commercial high-speed of 430 km/h using superconducting magnets. The tracks and the bottom of trains have large magnets in place, and it is the basic effect of repulsion that propels the train forward. Now how these large magnets are manufactured? They are made using the fundamental phenomenon of electromagnetism.

Last but not the least are the electromagnets. This is a very vague categorization, as most of the aforementioned applications also come under it. But here we can talk about general electromagnets used for everyday purposes. They are used in a wide variety of applications like the industrial electromagnets, which are used to lift heavy objects, or the electrical actuators, which are used in music equipment like loudspeakers. There are thousands of other uses as well of them.

These are just a few applications of electromagnetism. Our world is filled with countless such dependencies. It is said that electromagnetism is the glue of our Universe, and there couldn’t have been a much more accurate description of it. Studying this topic should form a vital part of one’s education curriculum as education is itself a mean to know more about the Universe itself.

Electromagnetism has numerous applications in today’s world of science and physics.