IISc- All you need to know

Before getting into the details of IISc, let us go through the headings under which we shall discuss it.
Table of Contents:

Located in Bangalore, the Indian Institute of Science (IISc) is premier Institute for advanced scientific and technological research and education in India. A visionary partnership between Jamsetji Tata, the Maharaja of Mysore, and the Government of India was instrumental in the establishment of IISc. The Institute was formed with an objective of providing advanced instruction and to conduct original investigations in all branches of knowledge to promote the material and industrial welfare of India. In the 107 years of its existence, IISc has laid equal emphasis on the pursuit of basic knowledge in science and engineering as well as on leveraging its research findings for the country’s industrial and social welfare.

The difference between IITs and IISc is that IISc offers BS degrees in both core and interdisciplinary topics. In this sense, IISc has a purer scientific approach and it is no wonder that IISc tends to put out more research work than IITs in the core science region.

Another feature of IISc is that its faculty has a high collaboration with industry and government research grants and projects. When considering Citations per Faculty, IISc ranks 11 in the world and 3 in Asia.

IISc has more than 40 departments, centres or units, around 4000 students, and nearly 550 academic and scientific staff personnel.

The departments and centres at IISc fall under the purview of either the Science Faculty or the Engineering Faculty. These departments/centres are divided into six divisions, each headed by a Chairperson.

The following chart lists all the IISc departments and the divisions they are assigned to:

IISc offers a four-year Bachelor of Science (Research) program wherein the students study all the specializations (i.e. Biology, Physics, Chemistry, Mathematics, Materials, Earth and Environmental Sciences as well as Humanities and Engineering) in the first three semesters. Thereafter, the students can exercise a choice to pursue a course of their liking. Students who have cleared their 12th Standard board exam (or its equivalent) in 2017 and those who have passed this examination in 2016 are eligible to apply for this program.

The selection to the B.Sc. program of IISc is based on the merit list of Kishore Vaigyanik Proashan Yojana (KVPY) examination, JEE-Main, JEE- Advanced, and NEET. There is a reservation for SC/ST/OBC/PWD and Kashmiri-Migrant candidates.

IISc encourages students to pursue advanced research in the areas of Biological, Physical, Chemical, and Mathematical Sciences Culminating into a Ph. D degree. It is observed that students pursuing this program save nearly a year compared to those who choose a two year Master’s Degree Program elsewhere and then join IISc for a Ph. D program. IISc has an intake of 50-60 students each year under this program (15-18 students in Biological, Chemical, and Physical Sciences each and 12-15 students in the Mathematical Sciences.

Candidates holding a Bachelor’s degree in Biology/ Biotechnology/ Physics/ Chemistry/ Mathematics/ Pharmacy/ Veterinary Sciences/ Agriculture, under the10+2+3+4 system are eligible to apply for this program.

IISc also offers Master of Technology (M. Tech.), Master of Design (M. Des), and Master of Management (M. Mgt.) and takes in around 400 students every year for these courses. Candidates can apply to a maximum of five disciplines from the M. Tech. and M. Des programs.

For the students with a keen sense of scientific inquiry, IISc offers advanced research opportunities in the areas of science, engineering, and technology. In fact, the research students form the largest group on the IISc campus (more than 70% of the student population). The Institute confers around 250 Ph. D and M. Tech. (Research) degrees every year.

Candidates can go through the following chart to understand the admission process and eligibility requirements for all the IISc programs: 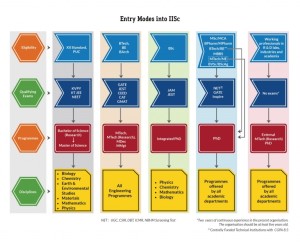 You can also check the detailed instructions for filling the IISc UG online application form.

The table given below outlines the year-wise fees for IISc’s four-year B. Sc. Course under the various heads. The fee is the same for all the disciplines.

Please find below the fee structure (INR/per annum) for the General/OBC categories with respect to the other courses offered by IISc.

*To be paid in the first year only.

**For the first two years and thereafter on par with Ph. D.

You can check the fee structure for the SC/ST category and the ERP program here.

Candidates can view and download the cut-off marks for the various courses offered by IISc from the links given below:

IISc’s strong ties with the industry through joint research and its teaching programs provide students with invaluable exposure to the corporate environment. The placement season begins in September every year and lasts until May next year. Various prestigious organizations visit the IISc campus every year for their recruitment needs and offer excellent career opportunities to the IISc graduates. The Institute’s placement centre guides and assists the students with regards to the placement opportunities.

The table given below highlights the distribution of CTC for the IISc 2015-16 Masters Students:

For detailed information, you may refer to the IISc placement brochure.

The campus houses more than 40 departments marked by routes such as the Gulmohar Marg, the Mahogany Marg, the Badami Marg, the Tala Marg, the Ashoka Marg, the Nilgiri Marg, the Silver Oak Marg, the Amra Marg and the Arjuna Marg. The Institute is fully residential and spreads over 400 acres of land situated in the heart of Bangalore city. The campus features six canteens (cafeterias), a gymkhana (gymnasium and sports complex), a football and a cricket ground, four dining messes (halls), one multi cuisine family restaurant, nine men’s and five women’s hostels (dormitories), an air strip, a library, two shopping centers and residence areas for faculties and other staff members, besides other amenities.

The IISc campus is replete with facilities such as Travel Agencies (Domestic & International), Provision & General Stores, Photo copying and DTP Centres, Pharmacy, Laundry, Tailoring Shops, Tea and Coffee Shops, Baby Care Centre, etc. thus making a totally self-sufficient campus. In addition to this, Canara Bank and SBI have fully functional computerized branches with ATMs. The Amenities Hall is always available for organizing the religious and personal functions of the staff and the students.

The IISc campus harbors both exotic and indigenous plant species with about 110 species of woody plants. The roads on the campus are named after the dominant avenue tree species.

Learn more about the facilities available inside the IISc Campus.

The alumni and faculty of IISc are household names such as Homi Bhabha, Vikram Sarabhai, C.V. Raman, C.N.R. Rao. Homi Bhabha was responsible for the idea of Tata Institute of Fundamental Research (TIFR), and Vikram Sarabhai was the founder of India’s space programme.

Most IISc alumni have remained in India and taken on research positions at various governmental research organizations or in the corporate research environments. This is significantly different from the alumni of most IITs.

IISc is widely regarded as India’s finest institution in its field. IISc has made significant contribution to advanced computing, space, and nuclear technologies.

Learn all about IISER and the career opportunities available to IISER graduates. Also look at IISC Bangalore.