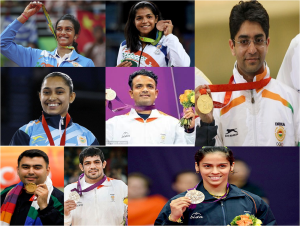 When you look at the final medal tally in the Rio Olympics 2016, you’ll find India at the bottom of the table, even behind countries like Thailand, Vietnam, Fiji, Indonesia, etc. You get the point right? Any thinking Indian is left frustrated after every Olympics, scratching their heads as to what could be the reason for our consistently dismal performance at the Olympics? Why does a country with a rapidly growing economy that competes with the likes of China is left far behind when it comes to churning out quality athletes culminating into Olympic medals? China bagged a total of 70 medals at Rio Olympics 2016, while India could only manage two, I’m sure there was no lack of effort from the athletes. So, where does the fault lie? Are we, as a country doing enough to support the athletes? India is known to produce quality minds with its world-class technical education so why not give the same impetus when it comes to backing sports that bring pride and glory to the entire nation on an international platform? We produce IITians who go on to lead multinationals, so do we need an IIT for sports to train students for Olympics? Maybe, Yes!

India, being a cricket-struck country, has never really thought beyond cricket. Partly responsible for this prejudiced mindset are the British who inculcated the sport in the countries they colonized. However, it has been decades since we’ve become an independent nation, and still we don’t focus on or honor other sports. Looking at the results of Rio Olympics, 2016, maybe it’s time to have an IIT to train students for Olympics.

Why we Need an IIT for sports to train students for Olympics?

Finally, we can’t just leave it all to the Government. We also need to do our bit and encourage athletes in whatever little way we can. It could be a small social-media initiative or relevant posts that cost nothing. We often hear rumors of Indian Olympic medal winners returning to their homeland, only to find deserted airports with no one welcoming them. It does not come as a surprise that most Indians would rather watch a cricket world cup than cheer for a gymnast or swimmer. With such a mindset, we can’t expect the athletes to stay motivated and win medals at the Olympics.

It’s not surprising that a leading Western Daily recently called India a ‘mysteriously non-athletic nation.’ The natural reaction to such observations is to tout our cricketing heritage. But we could do more than that. India needs IITs for sports. India needs the latest in coaching, technology, and amenities to birth sporting legends.

If we can have premier institutes for engineering, medicine, law, arts, fine arts, mass communication, etc. then why not a premier institute in the country which receives ‘institute of national importance‘ status, purely for sports?

The idea of a utopian India is far but achievable. It’s only we the people, who can bring it to life.