Trust me; age is nothing but a number. Do you remember educationist, human rights activist and youngest-ever Nobel Prize laureate Malala Yousafzai, who defied the Taliban in Pakistan to ensure education for girls and showed the world how one child with a vision can make a huge positive difference?

Fortunately, she is not the only one trying to make the world a better place. There are lots of kids and teenagers taking steps big and small to address some of the world’s problems, inspiring hope for our future along the way. Some have innovated and invented for a good cause. Some have inspired us by overcoming huge odds. Others have moved us simply by their generous and hopeful view of humanity.

Be it a genius, artist or activist, these youngsters have changed the country for the better. Here are 5 inspirational kids of India, who have pushed the limits to make a difference in the lives of many.

5 Of The Most Inspirational Kids Of India: When visually impaired 18-year-old Kartik Sawhney scored 96% in CBSE Class 12 exams and became the first visually impaired student to score as much, his joy knew no bounds. However, little did he know that it wouldn’t be enough and he would have to prove his mettle again and again. Sawhney was not allowed to sit for the IIT entrance examination for three consecutive years just because he was blind. However, his hard work paid off and he finally got a fully funded scholarship to pursue a 5-year engineering programme at Stanford University in California. He plans to come back to India and improve the living conditions for the visually impaired. He is one of the most inspirational kids of India!

Babbar Ali – World’s Youngest Headmaster at the Age of 16 This young boy has fought against all odds with a fire in his belly and a deep desire in his heart to educate the children in his neighborhood. Babbar is a 12th standard student of ”Cossimbazar Raj Govinda Sundari Vidyapeeth”, Murshidabad, West Bengal. He attends a school like any normal children from morning till late afternoon. But what he does after his school hours is to be watched, learned and adopted.

Babbar Ali is the Headmaster of an afternoon school called “Anand Shiksha Niketan” where there are 800 students, at present. It all started 9 years back with just 8 students. The school is being run in a temporary concrete structure without any major infrastructure. At his Gurukula, Babbar provides free education to all the kids who come from faraway places to learn the basic lessons of life. 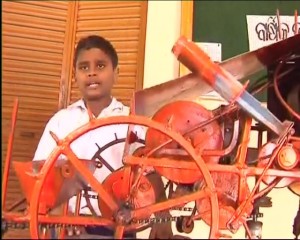 Subhendu Kumar Sahu, a student of Class 8 in Ganjam district of Odisha, received the prestigious National Child Award for Exceptional Achievement from President Pranab Mukherjee on the Children’s Day 2016. He has developed Gift for Farmers, an innovative science device that helps in sowing, tilling of the soil, sprinkling of pesticides, cutting and processing of paddy crops. He has also taken part in several extra-curricular activities and received a number of awards at both state and national-level competitions. At the National Tennis Championship held in October 2016, 13-year-old Ajay Malik relied on his supreme strength and ordinary diet to win the Under-14 boys singles title. His father, Ajmer Malik, a retired Subdedar from Indian Army, did not have even enough money to offer even bananas and energy drinks to Ajay between the breaks during his matches. Ajay began playing tennis at the age of 10 on mud courts, developed by his father on agricultural land. His sheer talent, willpower and perseverance ensured that Ajay won the biggest title available in his age category within a span of only three years.

Read: Roger Federer: What makes Him the Greatest Tennis Player Ever?

Kumar Gaurav – The Boy Who Mortgaged His Home For Chess

The National Junior Chess Champion of India, 16-year-old Kumar Gaurav mortgaged his house so he could keep playing chess. For Kumar, who has the potential to become a Grandmaster according to his coach, success hasn’t come easy. He has never trained with his coach on a real chess board – all the training sessions take place online with the help of chess software and Skype. Also, since participation in tournaments across the country puts a strain on his family’s finances, the hardworking lad travels for tournaments unreserved in General Class.

When we see lives like these, doesn’t it make you start believing more in yourself? It is imperative to understand that you will have to face roadblocks towards your journey. You should be willing to lose something if you want to gain something else.