The comparison of quantities which varies in a one-liner way is known as Calculus.  Calculus is known to have significant applications in Science and Engineering. Quite a few topics such as acceleration of current in a circuit or velocity are known not to behave in a linear fashion. Therefore, we need calculus to study the continuously changing quantities. We can also say that calculus is that branch of mathematics which deals with continuous change. In this article, we will primarily look into a brief introduction to Differential Calculus. Let us first understand, what is it.

There are two main branches of Calculus

The ancient mathematician-Aryabhatta had used differential calculus to find the motion of the moon.  Contemporary mathematics uses differential equations and functions to find out the maxima and minima of curves which are in common usage.

Some more applications are as follows

The degree of closeness to any value or approaching term is known as limits. Limits are an important part of calculus and mathematical analysis and used to define integrals, derivatives, and continuity. 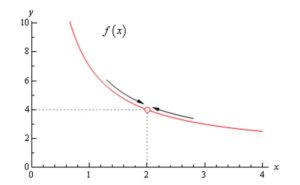 The limits are expressed as

The expression for the derivative is defined as-

Now to find out the change in y with a unit change in x can be found as follows:

It is called the derivative.

Steps to find the Derivative:

Now d(x) is ignorable because it is considered to be too small.

The derivative of x2 is 2x means that with every unit change in x, the value of the function becomes twice (2x).

The process of finding the area under the curve is known as Integration. You can use integration to find out areas, volumes etc.

Integration can be of two types

If y = f(x) be a function of x. Then, the rate of change of “y” per unit change in “x” is given by dy / dx
If the function f(x) undergoes a minute change of h near to any point x, then the derivative of the function is defined as

in case a function is denoted as y=f(x), then the derivative is indicated by the following notations.

F’(x) is called as Lagrange’s notation.

Differentiation is the process of determining the derivative of a function at any point.

Functions in calculus can be categorized under two heads

Some of the basic differentiation rules that need to be followed are as follows.

(i) Sum or Difference Rule

This was a consolidated study of the basics of Differential Calculus. If you want to know how Calculus is applicable in our daily lives, visit here.