NASA has done it again. It’s another big leap for mankind. The spacecraft that has been travelling to the majestic planet for 5 years is now successfully orbiting it. Juno orbits Jupiter! What it will discover is a different thing but congratulations to the entire human race! 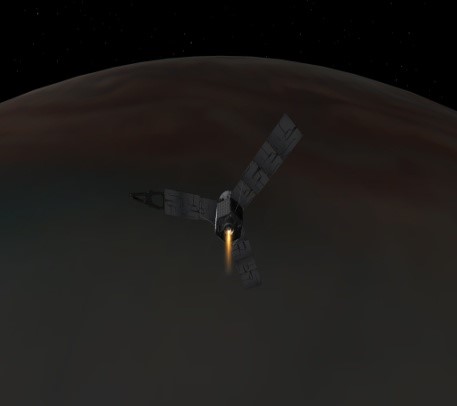 Welcome to Jupiter! NASA’s Juno spacecraft is orbiting Jupiter at this moment! “NASA did it again!” pronounced an elated Scott Bolton, investigator of Juno from Southwest Research Institute in San Antonio, to loud cheers and applause from the overflow crowd of mission scientists and media gathered at the post orbit media briefing at NASA’s Jet Propulsion Laboratory (JPL) in Pasadena, Calif. After a nearly five year journey covering 1.7-billion- miles (2.8-billion- kilometers) across our solar system, NASA’s basketball court-sized Juno orbiter achieved orbit around Jupiter, the ‘King of the Planets’ late Monday night, July 4, in a gift to all Americans on their 240th Independence Day and a gift to science to elucidate human race’s origins. “We are in orbit and now the fun begins – the science,” said Bolton at the briefing. “We just did the hardest thing NASA’s ever done! That’s my claim. I am so happy … and proud of this team.” 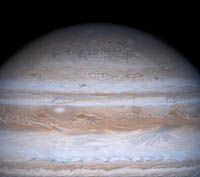 And the science is all about peering far beneath the well known banded cloud tops for the first time to investigate Jupiter’s deep interior with a suite of nine instruments, and discover the mysteries of its genesis and evolution and the implications for how we came to be. Just imagine what it could discover and what it would mean for the human race. “The deep interior of Jupiter is nearly unknown. That’s what we are trying to learn about. The origin of us.” Solar powered Juno successfully entered a polar elliptical orbit around Jupiter after completing a must-do 35-minute-long firing of the main engine known as Jupiter Orbital Insertion or JOI. The spacecraft approached Jupiter over its north pole, affording an unprecedented perspective on the Jovian system – “which looks like a mini solar system” – as it flew through the giant planets intense radiation belts in ‘autopilot’ mode. The primary scientific goal of the Juno mission is to significantly improve our understanding of the formation, evolution and structure of Jupiter. Concealed beneath a dense cover of clouds, Jupiter, the archetypical ‘Giant Planet’ safeguards secrets to the fundamental processes underlying the early formation of our solar system. Present theories of the origin and early evolution of our solar system are currently at an impasse. Juno will provide answers to critical science questions about Jupiter, as well as key information that will dramatically enhance present theories about the early formation of our own solar system.

As students of science, we are very excited with these developments. The future of science can completely change with this. Tell us your thoughts in the comments below.