(This one has two rows and three columns)

Let’s see the matrix multiplication by a single number.

These are the two calculations:

In the above example, the number 2 is called a scalar, and the process is called ‘Scalar Multiplication.’ 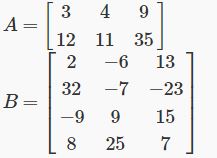 In the above examples, we have matrices A and B. The general notation of a matrix is:

If a matrix has M rows and N columns, the order of matrix is MxN. We call this an ‘M by N matrix’. The number of rows and columns that a matrix has are called its order or its dimension and by convention, rows are listed first; and columns, second. So, the order of matrix A is 2 × 3 or you can say B is 4 × 3 matrix. If a matrix is of m × n order, it will have mn elements although the converse is not true.

Matrix Multiplication: A direct application for Order of Matrix

The order of matrix finds its direct application in matrix multiplication as it is the key decisive factor in the process. It is only through the order of matrix involved in the calculation that we decide whether the matrices are eligible to get multiplied. For matrix multiplication to work, the columns of the second matrix have to have the same number of entries as do the rows of the first matrix. Hence, A and B above can’t be multiplied as neither 3=4 (For A x B) or 3=2 (For B x A). This brings another issue:

Matrix multiplication is not commutative

Take into consideration the following example (With different A and B matrices):

In other words, assume another matrices P (p1 x q) and Q (q x p2). The multiplication PQ is defined whereas QP is not allowed as p2≠p1.

Matrices have numerous applications in the scientific field as well as practical real life problems. Matrices are used extensively in the study of electrical circuits, quantum mechanics, calculation of battery power outputs, conversion of electrical energy into other useful forms of energy, projection of 3-D image onto a 2-D screen, ranking of pages in Google search, seismic and population related surveys, calculation of an economy’s GDP, and many more.

A study of matrix multiplication is a must for everyone and once you practice them enough, you will be able to do them faster. Happy learning!