What is Plant Respiration?

The process by which cells obtain chemical energy by the consumption of oxygen and the release of carbon dioxide is known as respiration. In order to carry on respiration, plant cells need oxygen and a means of disposing of carbon dioxide just as animal cells do. In plants, each part such as root, stem performs respiration because plants do not possess any specialized organs like animals for the exchange of gases.

The process of respiration is expressed as:

We can conclude same from the above equation as well that respiration uses oxygen and produces carbon dioxide.

This is the major question when we think about plant respiration. Since plants do not possess any specialized organs like lungs so we can say plants do not breathe rather they respire. Plants respire through lenticels and stomata (present in stems and leaves respectively) which carry out the function of the gaseous exchange.

Breathing refers to the process of taking air into and expelling it from the lungs which simply means that plants do not breathe, they respire.

In plants respiration also takes place through roots. In soil oxygenated air is present in air spaces between soil particles. This oxygen is absorbed into the roots by root hair present on the roots. The hairs of the roots are in direct contact with them. In fact, a root hair is a lateral tubular outgrowth of the outer epidermal cells of a root. The oxygen present in between the soil particles diffuse into the root hairs. From root hairs, oxygen is supplied to all the parts of roots for respiration. During respiration, oxygen is converted into carbon dioxide gas which is diffused in opposite direction i.e. out of the roots by the same root hairs which complete the process of respiration in roots.

In the plants having herbaceous stem exchange of gases takes place through stomata and the carbon dioxide produced during the process gets diffused into the air via stomata only. While in the plants having hard and woody stems the exchange of gases takes place through lenticels. Lenticels are actually loosely packed dead cells which are present as small pores on the bark of woody plants or old roots. These enable oxygen to reach the intercellular spaces of the interior tissues and carbon dioxide to be released into the atmosphere by the process of diffusion which completes the process of respiration in stems.

In leaves, the exchange of respiratory gases takes place through very tiny pores called stomata. The stomata are present in large number on the lower surface of leaves of the plant. Each stoma has a pore at its centre which is surrounded and controlled by two kidney-shaped cells called guard cells. When the stoma opens the exchange of gases takes place between the atmosphere and interior of the leaf by the process of diffusion which completes the process of respiration in leaves.

There are two main types of respiration:

This type of respiration leads to a complete oxidation of stored food in the presence of oxygen and releases carbon dioxide, water and a large amount of energy present in the respiratory substrate. All higher organisms respire aerobically.

The process of aerobic respiration is expressed as:

The process of aerobic respiration is expressed as:

Differences Between Respiration and Photosynthesis

Photosynthesis is simply a process that is used by plants and certain kinds of bacteria to create energy from sunlight. Chlorophyll, as we know, is the green pigment in plants that is the reason behind this conversion process. All other living things rely on the process of respiration to remain alive. On the contrary, respiration is basically the concept of taking oxygen from the air and putting it through the lungs, which provides more oxygen to blood that can be used in the body. The carbon dioxide waste that is produced is expelled out of the lungs. Cellular respiration ideally uses glucose, or sugars, from food molecules and converts them into water, carbon dioxide, and ATP, a nucleotide that is essential to the body.

Let’s take a look at the primary differences between the both.

There are two major steps in the mechanism of respiration:

(i) Glycolysis: During the process of respiration, carbohydrates are converted into pyruvic acid through a series of enzymatic reactions. This series of reactions is known as glycolysis which takes place in the cytosol.

(ii) Krebs cycle:  After glycolysis pyruvic acid enters mitochondria where several enzymes catalyse the reactions and pyruvic acid is finally converted into CO2 and water. This series of enzymatic reactions is known as Krebs cycle.

Let us discuss the whole mechanism of plant respiration in more detail.

The term glycolysis is derived from two Greek words, i.e. Glycos, which denotes sugar and lysis, means splitting. It is a term used to describe the sequential series of reactions present in a wide variety of tissues that starts with a hexose sugar (usually glucose) and ends with pyruvic acid. The scheme of glycolysis was given by Otto Meyerhof, J. Parnas and Gustav Embden and therefore referred as EMP pathway.

Glycolysis is the first stage in the breakdown of glucose. Glycolysis is common to both aerobic and anaerobic modes of respiration. Glycolysis occurs in the cytoplasm of cells. During this process, glucose undergoes partial oxidation to form two molecules of pyruvic acid.

In plants, glucose is derived from sucrose which is the end product of photosynthetic carbon reactions.

All steps can be summarized as:

The pyruvic acid generated in the cytoplasm through glycolysis is transferred to mitochondria. This is the initiation of the second phase of respiration. As soon as, pyruvic acid enters the mitochondria, one of the three carbon atoms of pyruvic acid is oxidised to carbon dioxide in a reaction called oxidative decarboxylation. Here, pyruvate is first decarboxylated and then oxidised by enzyme pyruvate dehydrogenase. This enzyme is made up of a decarboxylase, lipoic acid, TPP, transacetylase and Mg+2.

The reaction involved is:

It is the second stage of cellular plant respiration.  It is also known as a tricarboxylic acid cycle (i.e. TCA cycle). It discusses the role of pyruvate in the conversion of glucose hydrogens into fumarate. This cycle involves two decarboxylations and four dehydrogenations. It plays an integral role in the catabolism of breaking down of organic fuel molecule i.e. glucose, sugar, fatty acid and amino acids. The cycle starts with the condensation of acetyl group with oxaloacetic acid and water to release citric acid.

The overall reaction of Krebs cycle is :

The starting point of Krebs cycle is the entrance of acetyl Co-A into a reaction to form citric acid. In the first reaction of Krebs cycle, one molecule of acetyl Co-A combines with 4-carbon oxaloacetic acid (OAA); with the result 6-carbon citric acid is produced, and Co-A is released. This reaction is catalysed by enzyme citrate synthase. Now, citrate (citric acid) is isomerised to isocitrate (isocitric acid). Then, Cis-aconitic acid is converted into isocitric acid with the addition of water in the presence of iron-containing enzyme aconitase.

During citric acid cycle (Krebs cycle) 3 molecules of NAD+ and one molecule of the FAD (Flavin Adenine Dinucleotide) are reduced to produce NADH and FADH2 respectively. Along with that NADH and FADH are produced. Now, they are linked with electron transport system (ETS) and produce ATP by oxidative phosphorylation. At the end of Krebs cycle, glucose molecule is completely oxidised. From one glucose molecule, two pyruvic acid molecules are formed. After oxidation of one pyruvic acid molecule, three CO2 molecules are released. Thus, in total 6 molecules of CO2 are released.

The entire process can be summarized as: 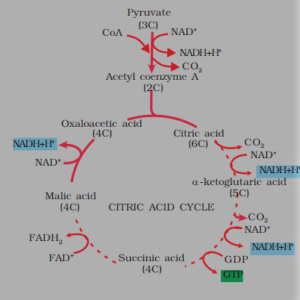 This was all about Respiration in Plants. For more such informative articles keep following toppr.com.