Polyvinyl alcohol, also known as PVOH, PVA, or PVAL, is a synthetic polymer that is soluble in water. It is effective in film forming, emulsifying, and has an adhesive quality. It has no odor and is not toxic, and is resistant to grease, oils, and solvents. It is ductile but strong, flexible, and functions as a high oxygen and aroma barrier.

While other vinyl polymers are prepared by polymerization of its corresponding monomer, PVA undergoes either partial or complete hydrolysis of polyvinyl acetate to remove acetate groups. To ensure lubricity and binding action in order to protect the fibers and help with handling, sizing is a processing mechanism applied to rovings and yarns.

299 and 399 organic sizing, which is composed of PVA and additives such as plasticizers, lubricants, etc.) is designed to facilitate easy removal through heat cleaning. The key raw material to create PVA is the vinyl acetate monomer. The monomer is manufactured through the polymerization of vinyl acetate. Then it goes through partial hydrolysis, which consists of partial replacement of the ester group in vinyl acetate with the hydroxyl group, completed in the presence of the aqueous sodium hydroxide. After the gradual addition of the aqueous saponification agent, the PVA is precipitated, washed and dried.

There are two ways in which the 4% aqueous solution of Polyvinyl alcohol (PVA) may be created. The first uses a conventional heating method, the second uses the microwave heating method. The latter is easier to conduct and is less time-consuming. Once the 4% PVA solution is made, it can last between 6 and 8 weeks. Generally, it is advisable to refrigerate this solution, which supports the growth of bacteria.

When making the Polyvinyl alcohol solution, it is recommended to use tap water, as bacteria grows faster in PVA containing distilled water.

By annealing amorphous PVA films above 85°C, the glass transition temperature, semi-crystalline films of PVA were prepared. This allowed macromolecules to form crystallites, stabilizing the films and inducing a chemically cross-linked behavior.

Polyvinyl alcohol is widely used to strengthen textile yarn and papers, particularly to make the latter more resilient to oils and grease. It is also used in freshwater sports fishing. PVA is added into bags that are filled with oil-based or dry fishing bait and attached to the hook. As PVA is soluble in water, when the bag lands on the bed of the water, it breaks down, leaving the hook bait surrounded by pellets and ground bait. This attracts fish to the hook bait, although the PVA does cause the plastic to dissolve in water.

PVA may also be used as a coating agent for food supplements and does not pose any health risks as it is not poisonous. One of the leading industrial uses for PVA is for food packaging, accounting for 31.4 percent of the global share in 2016. To combat moisture formation from foodstuff, PVA film is created to be thin and water-resistant. Its crosslinking density and resistance to moisture are added benefits to its usability in this area.

Polyvinyl alcohol is a resin, a natural or synthetic organic compound made of non-crystalline or viscous substance. Hence, it is often utilized as the starting point for the creation of other resins such as polyvinyl butyral (PVB) or polyvinyl formal (PVF). PVB has an adhesive quality and is a water-resistant, plastic film, which is often used to laminate safety glass for vehicles. PVF is commonly used to insulate wires.

It is also interesting to note that in another growing market, the pharmaceutical market, use of polyvinyl alcohol for coating of medicinal tablets is quite prominent. Its various chemical properties have shown the benefit of its use in health applications, and in particular in pharmaceutics. However, extensive experimentation and pharmaceutical use of PVA/PVOH has been limited due to regulations on food and drugs.

Over the course of the last several years, the biodegradable polymer market has gone through a series of compilations and transformations in the United States. In 2016, polyvinyl alcohol market was at an estimated 172.8 kilotons of material. Due to stricter regulations regarding disposal and decreasing availability of landfills, there is a greater demand for sustainably packaged versions of the product. With the advent of new technology surrounding renewable natural polymers, polyvinyl alcohol has become a highly lucrative due to its biodegradable quality, under certain microbial conditions.

Worldwide polyvinyl alcohol market volume by region in 2016 (in percentage) 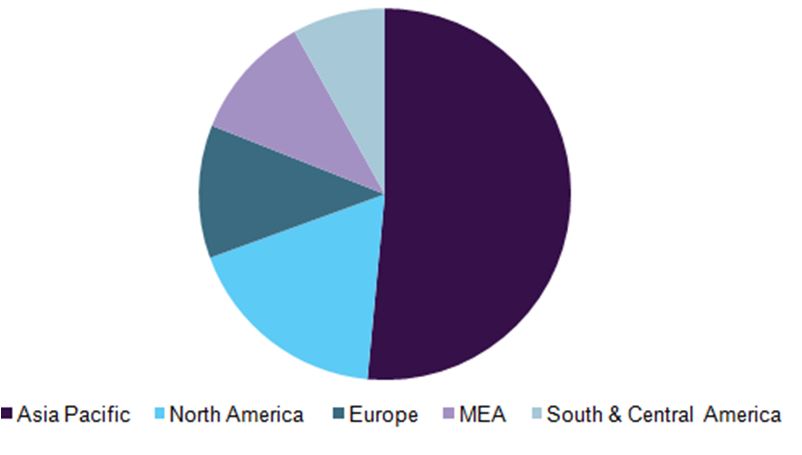 Furthermore, given its varied application and usability, PVA is in demand in various industrial markets such as textile, coatings, paper, ceramics, and wood. Since polyvinyl alcohol consists of ethanol and is water soluble, while being resistant to greases and oils, it is a unique polymer, with few capable substitutes.

Currently, Asia Pacific, North America, and Europe are the largest players in the polyvinyl alcohol market. Regionally, Asia Pacific reported an estimated 580.3 kilotons of PVA in 2016, projecting a compound annual growth rate (CAGR) of 5.5 percent from 2017 to 2025.

Also, check out all the NCERT Solutions for Class 8.