A Light Emitting Diode (LED) is one of the latest inventions and is extensively used these days. From your cell phone to the large advertising display boards, the wide range of applications of these magical light bulbs can be witnessed almost everywhere. Today their popularity and applications are increasing rapidly due to some remarkable properties they have. Specifically, LEDs are very small in size and consume very little power. The magnificent, beautiful, dazzling colors involved with LEDs may be quite picturesque, but do you really know how these effects are actually created in them or rather how do LED light bulbs work? 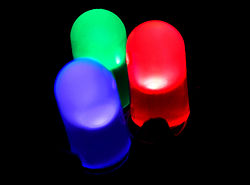 As is evident from its name, LED (Light Emitting Diode) is basically a small light emitting device that comes under “active” semiconductor electronic components. It’s quite comparable to the normal general purpose diode, with the only big difference being its capability to emit light in different colors. The two terminals (anode and cathode) of a LED when connected to a voltage source in the correct polarity, may produce lights of different colors, as per the semiconductor substance used inside it.

See what our Students have to say about us

A light-emitting diode is a two-lead semiconductor light source. It is a p–n junction diode that emits light when activated. When a suitable voltage is applied to the leads, electrons are able to recombine with electron holes within the device, releasing energy in the form of photons. This effect is called electroluminescence, and the color of the light (corresponding to the energy of the photon) is determined by the energy band gap of the semiconductor.

Working in a nutshell:

1. Very low voltage and current are enough to drive the LED.

2. Total power output will be less than 150 milliwatts.

3. The response time is very less – only about 10 nanoseconds.

4. The device does not need any heating and warm up time.

5. Miniature in size and hence lightweight.

6. Have a rugged construction and hence can withstand shock and vibrations.

1. A slight excess of voltage or current can damage the device.

2. The device is known to have a much wider bandwidth compared to the laser.

3. The temperature depends on the radiant output power and wavelength.

To learn more on electricity and telecommunication read here!