There are two forms of Reproduction: Asexual and Sexual. In asexual reproduction, an organism can reproduce without the involvement of another organism; while Sexual reproduction typically requires the sexual interaction of two specialized organisms, with typically a male fertilizing a female of the same species to create offspring organisms whose genetic characteristics are derived from those of the two parental organisms.

In asexual reproduction, new plants are produced that are genetically identical clones of the parent plant, and without the contribution of genetic material from another plant. Asexual reproduction in plants can be further divided into two Vegetative Reproduction and Apomixis.

When a a vegetative piece of the original plant such as root, stem or leaf is involved in producing an offspring, it is know as ‘Vegetative Reproduction in Plants.’ It is often known as a process of ‘Survival’ and expansion of Biomass.

The broad advantages and disadvantages of Vegetative Reproduction in Plants are listed in the table below:

The various types of Asexual Vegetative Reproduction in Plants are:

Budding is a form of asexual reproduction in which a new organism develops from an outgrowth or bud due to cell division at one particular site. The new organism remains attached as it grows, separating from the parent organism only when it is mature, leaving behind scar tissue. For example: Yeast is a single-celled organism which reproduces by this mode. 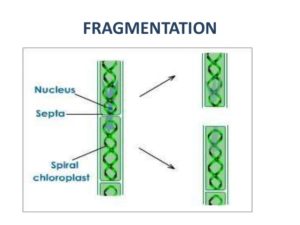 Fragmentation in plants is a form of asexual reproduction or cloning in which an organism is split into fragments. Each of these fragments develop into mature, fully grown individuals that are clones of the original organism. Fragmentation is the mode of reproduction in Algae such as Spirogyra.

The term ‘Sporogenesis’ is used to refer to the process of reproduction in plant via spores. Reproduction via spores involves the spreading of the spores by water or air. Reproductive spores grow into multi-cellular haploid individuals or sporelings.  Each spore is covered by a hard protective outer covering to withstand unfavorable conditions such as high temperature and low humidity, thus enabling survival for a long time. Once conditions are favorable, a spore germinates and develops into a new individual. The plant organisms which reproduce by this method are Fungi on bread, certain types of moss and ferns, etc.

For sexual reproduction of plants, interaction between the male and female species is a prerequisite. The offsprings’ genetic structure is not identical but derived from the combination of parent plants.

The sexual reproduction in plants takes place in two phases:

Through meiosis, the genes of the organism are rearranged and the number of chromosomes is reduced to half i.e Haploid. The plant Produces Gametophytes through the process of meiosis. The Gametophyte then produces the Male or Female Gametes by cell division or mitosis.

It involves union of both Male and Female ‘Gametes’ and leads to restoration of the number of chromosomes to form a  Diploid Zygote, which then develops into the offspring. The resulting genetic composition has characteristics of both the parent plants from which it is derived.

History of Sexual Reproduction In Plants:

Parts of the Reproductive System in Plants:

The Flower is the basic reproductive organ in plants.

A flower is called Unisexual if it has only either the male or the female reproductive parts in it; example: flowers of Corn, Papaya, Cucumber.

A flower is called bisexual if it has both the male and the female reproductive parts in it; example: flowers of Mustard, Rose, Petunia.

Structure of the Flower:

The male reproductive part or the Androecium is made up of units called ‘Stamen‘. Each Stamen consists of two parts: A stalk called the ‘Filament‘ which is topped by ‘Anther.‘ ‘Pollen Grains‘ which contain the male gametes or sperms are produced in the Anther.

The female reproductive part or the Gynoecium is the immermost whorl of the flower. It is made up of units called ‘Carpel.’ Multiple fused carpels form the ‘Ovary‘ where ‘Ovules’ containing female gametes are produced. Pistil is a structure comprising of fused carpels and has a sticky tip called the Stigma which acts as a receptor of pollen. The long Stalk acts as a supporting structure and aids development of Pollen tubes from the stigma downwards.

Process of Sexual Reproduction in Plants:

The sexual reproduction ins plants is carried out majorly by the process of Pollination. It is a process through which the pollen grain from an anther (male gamete) lands on to the stigma and gradually mates with the ovule (female gamete)

Pollination can be of two types:

For majority of plants, insects or animals act as ‘Pollinators‘ or carriers of pollen from one plant to another. Flowers have numerous mechanisms to attract the pollinators such as color, scent, heat, nectar glands, edible pollen and flower shape. 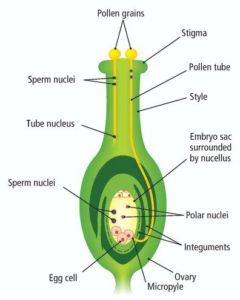 The process begins after the pollen grain sticks to the stigma and begins sending down the pollen tube through which the male gametes pass and unite with the female gametes in the ovary.

The matured and fertilized ovules form the seeds whereas the the fruits are formed from the mature ovaries.

The fruit formed by a single ripened ovary is called as a ‘Simple Fruit’ For example: Apples, Oranges, Apricots

The fruit formed by a cluster of matured ovaries, of a single flower is termed ‘Aggregated Fruit’ for example: Blackberry, Raspberry, Strawberry.

A cluster of many ripened ovaries on separate flowers growing together in the same inflorescence is called a ‘Multiple Fruit’ for example: Pineapple, Mulberry, Fig.

Difference between Asexual and Sexual Reproduction in Plants:

The most important differences between the mechanisms of sexual and asexual reproduction in plants are tabulated below:

Applied Biology of Reproduction Of Plants:

Thus to summarize, reproduction in plants occurs through either asexual or sexual mechanisms. A study of these mechanisms is of utmost importance in the science of Agriculture, Horticulture and Floriculture.

Healthy crops can be cultivated on the basis of this knowledge, and also the scientific agricultural practices lead to a higher yield.

Many new techniques of cultivation such as Grafting, Cutting, Budding, etc are in vogue nowadays to produce hybrid crops. These technique of grafting, cutting, etc are based on the knowledge of asexual vegetative reproduction and serve as enhancements of the natural process of plant cultivation.

In horticulture, a “cutting” is a branch that has been cut off from a mother plant below an internode and then rooted, often with the help of a rooting liquid or powder containing hormones. When a full root has formed and leaves begin to sprout anew, the clone is a self-sufficient plant, genetically identical to the mother plant. Examples include cuttings from the stems of blackberries, African violets, verbenas,etc. to produce new plants.

A related use of cuttings is grafting, where a stem or bud is joined onto a different stem. Nurseries offer for sale trees with grafted stems that can produce four or more varieties of related fruits, including apples. The most common usage of grafting is the propagation of cultivars onto already rooted plants, sometimes the rootstock is used to dwarf the plants or protect them from root damaging pathogens.

Since vegetatively propagated plants are clones, they are important tools in plant research. When a clone is grown in various conditions, differences in growth can be ascribed to environmental effects instead of genetic differences.

For information on Biological sciences !