Sainik School Bhubaneswar is a part of the 24 Sainik Schools group. It is a residential school for boys and the medium of instruction used is English. It was established in Bhubaneswar in 1962 and is affiliated to the CBSE Board. It is also a part of IPSC. The school trains the students to become strong, both mentally and physically, for entry in NDA (National Defence Academy) but is not solely limited to that as it aims to inculcate a sense of responsibility, optimism and sincerity that is widely acknowledged in all walks of life.

The Ministry of Defence, India, governs the administrating body, also known as the Sainik School Society, headed by Raksha Mantri. The local body of Administration is set up for each school, the Chairman of which is the Senior Defense Officer. 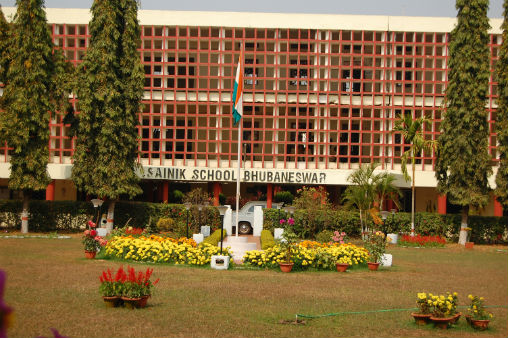 It was started and established by Late Shri Biju Patnaik who was the erstwhile Chief Minister of the state in the year 1962. It took two years for the infrastructure to be in place and was inaugurated by Jawaharlal Nehru in the year 1964.

Sainik School Bhubaneswar is located in close proximity of Utkal University and is just 2km away from the national highway. It is about 10 kilometers from the airport and 8 kilometres from the railway station.

A little about the campus

Sainik School Bhubaneswar has a main building, which has in it, classrooms, laboratories for physics, chemistry, social science, mathematics, computer science and English, an art room and a library, as well. The main mess is called Annapurna, which caters all students in one go. It is managed by a Mess Manager and provides both vegetarian and non-vegetarian food. Since it is a residential school, all students are assigned dorms under the direction of housemasters. They act as guide and administrator. Matrons assist the housemasters who look after comfort, utilities and hygiene.

The campus has a bank and a post office, there is a sports complex and a hospital in the campus itself for emergencies

The school grants admission to students in class vi, ix and xi and entrance exams are held for classes vi and ix through AISSEE in the month of January. The examination is OMR based and is based on the multiple choice model. The registration forms are available in the school office and the selection of students is based on merit as well as the availability of seats. The online and offline registration usually starts in October whereas the last date of registration is usually due in December. Results are announced by February. The exact date of the same can be known by checking the official website. The application fee, for both online and offline mode is Rs. 400 for General and Defence category, and Rs. 250 for SC/ST category.  A recent photograph needs to be attached and the photocopy of birth certificate, identity card etc. needs to be provided.

After being selected on the basis of the exam and student profile, a medical exam is also conducted. On clearing this examination, the student is called for a personal interview.

There is an eligibility criterion for students seeking admission to Sainik School Bhubaneswar. For standard vi, the age of the applicant should be between 10-11 years as on 1st July of the year. For standard ix, the age requirement of the student is 13-14 years as on the same date mentioned above. The school has some reservation policies for some groups. They are: SC Category – 15%, ST Category – 7.5% and Defence or ex-Defence category – 25%.

The tuition fee is to be paid in advance and in totality. This includes clothing, pocket money and incidental charges. In the year 2017-2018, the tuition fees charged were divided in the following subheads: tuition fee, diet fee, clothing fee, pocket money, caution deposit, incidental charges, personal clothing, crash program and books. The amount will be available on the school website as it is subject to revision.

There are various sports facilities for students. There is a football team, a volleyball team, hockey team and basketball team. The students are encouraged to participate in various external competitions and have placed in numerous such forums. The students are trained to be all-rounders and hence are seen to participate in extra-curricular activities like photography, essay writing, scientific modelling, art etc. There are various clubs in the school to aid the process of internal and external growth. They are media club, IT club, cultural club, band club, craft club, Hindi club etc. The school also organizes trips to give the necessary exposure to students. The school publishes an annual school magazine that goes by the name Saibhubans. It is for the students and by the students. It acts as a vent for several students to showcase their literary work and their various accolades. It gives a detailed insight as to what the students have been doing in the annual year and how their mentors have been supporting them in order to achieve new heights. The school also recognizes various events like Earth Day, Buddha Purnima, International Yoga Day, World population day and several others.

In case of further information, the various avenues for support are mentioned below: