Heat is a form of energy, often termed thermal energy. As we are familiar with the Law of conservation of energy which states that energy can neither be created nor destroyed, it can only be transformed from one form to another. For example – A toaster draws electric current (electrical energy) from a wall outlet and converts these moving electric charges into heat (thermal energy) in the filaments that turn red hot to cook your toast.

If we look at the atomic level, the absorbed heat causes the atoms of a solid to vibrate, much as if they were bonded to one another through springs. As the temperature is raised, the energy of the vibrations increases. In a metal, this is the only motion possible. In a liquid or gas, absorbed heat causes the atoms in the molecule to vibrate, and in addition to both rotate and move from place to place. Because there are more “storage” possibilities for energy in liquids and gases, their heat capacities are larger than in metals.

What is Heat Capacity?

Heat capacity is the amount of heat required to change the heat content of 1 mole of a material by exactly 1°C. It is denoted by Cp. The S.I. unit of heat capacity is joule per kelvin.

What is Specific Heat?

m = mass of the body

C = Specific heat capacity of a substance it depends on the nature of the material of the substance.

For liquid at room temperature and pressure, the value of specific heat capacity (Cp) is approximately 4.2 J/g°C. What this implies is that it takes 4.2 joules of energy to raise 1 gram of water by 1 degree Celsius. This value for Cp is actually quite large. This (1 cal/g.deg) is the specific heat of water as a liquid or specific heat capacity of liquid water. For comparison sake, it only takes 0.385 Joules of heat to raise the temperature of 1 gram of copper by 1°C.

If you leave a bucket of water outside in the sun in summer it will certainly get warm, but not hot enough to boil an egg. But, if you walk barefoot on the sand in summer, you’ll burn your feet. Dropping an egg on the metal of a car hood on a summer day will produce a fried egg. Metals have a much lower specific heat capacity than water. If you’ve ever held onto a needle and put the other end in a flame you know how fast the needle gets hot, and how fast the heat is moved through the length of the needle to your finger. Not so with water.

Lucky for me, you, and our fish in the pond, water does indeed have a very high specific heat capacity. We use this property of water in our body to maintain a constant body temperature. If water had a lower Csp value, then there would a lot of cases of overheating and underheating.

The oceans and lakes help regulate the temperature ranges that billions of people experience in their towns and cities. The water surrounding or near cities take longer to heat up and longer to cool down than do land masses, so cities near the oceans will tend to have less change and less extreme temperatures than inland cities. 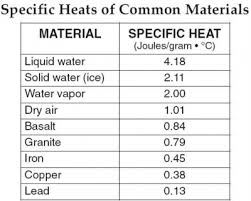 Why water has a high specific heat?

We can explain the reason for the high specific heat of water due to the hydrogen bonds. In order to increase the temperature of the water with the multitude of joined hydrogen bonds, the molecules have to vibrate. Due to the presence of so many hydrogen bonds, a larger amount of energy is required to make the water molecules break by vibrating them.

Similarly, for hot water to cool down, it takes a bit of time. As heat is dissipated, temperature decreases and the vibrational movement of water molecules slow down. The heat that is given off counteracts the cooling effect of the loss of heat from the liquid water.

As a summary, the reasons are:

To know more, you can refer to Calorimetry : System, Boundary, Surroundings, Specific Heat.