For example – In our daily lives, we might have encountered that when we rub a comb on dry hair and then bring it near torn small pieces of paper, the comb attracts those small bits of paper. In such a case, the comb is said to be electrically charged. This phenomenon arises from the force that electrically charged objects exert on each other, which is explained by Coulomb’s Law.

What is Electric Charge?

Electric charge is defined as the physical property of an object that causes it to experience a force when placed in an electromagnetic field i.e it is that quality of a matter with which it applies electrostatic force and interact with the surrounding objects. Electric Charge is often denoted by the symbol Q.

There are two types of Electric Charge

Characteristics of a Charge-

How does Electrostatics work?

Electrostatics theory works when there a certain amount of charge builds up on the surface of an object due to contact with other surfaces. Although charge exchange happens whenever any two surfaces come in contact or are separate, the effects of this charge exchange are usually noticed when at least one of the surfaces has a high resistance to electrical flow. This happens because the charge transferred from one object to another is trapped there for quite a long time enough, for their effects to be observed.

As discussed earlier Electrostatic force is well explained by the Coulomb’s Law. This law states that the electrostatic force of attraction or repulsion between two charged bodies is directly proportional to the product of their charges and inversely as the square of the distance between the two bodies. The SI unit of a charge is the coulomb.

In the above formula, q1 and q2 are the charges, r is the distance between them, K is the constant here 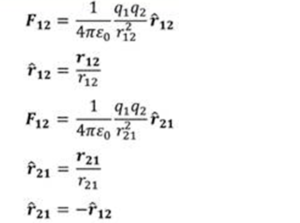 Here, we need to know the concept of Central forces which means that the forces due to two point charges are parallel to the line adjoining the point charges.

What is Electric Field?

The Electric field is the space surrounding the charge which exerts its influence on other charges. It is a vector field which can be defined anywhere except at the location of a point of charge. It is defined as the electrostatic force on a charge divided by the magnitude of the charge.

This means that the strength of the Electric field is measured by the electrostatic force it exerts on a unit positive charge.

Unit of Electric field is Newton per coulomb or volts per meter.

Every electric field has electric field lines which help in visualising the former. These lines begin with a positive charge and follow a path whether straight or curved and end on the negative charge.

Two electric field lines never intersect each other. Also, the number of lines drawn emerging from or terminating on a charge is proportional to the magnitude of the charge.

It is the electrostatic force acting on the positive charge on a point in an electric field. It is denoted by-

These were the basic concepts related to electrostatics. To know more about the related area, keep following TopprBytes.