Vellore Institute of Technology (VIT) is one of the front-runners among private engineering colleges in the recent decade. VIT University was established with the aim of providing quality higher education on par with international standards. The campus has a cosmopolitan atmosphere with students from all corners of the globe. VIT University, formerly known as Vellore Engineering College, is a private university in Tamil Nadu, India was founded in 1984, as Vellore Engineering College, by G. Viswanathan. The institution offers 20 undergraduate, 34 postgraduate, four integrated and four research programs. It has campuses in Vellore and Chennai, Tamil Nadu, India.

Vellore Institute of Technology is one of the best private engineering colleges in the country. Find all you need to know about this college right here! 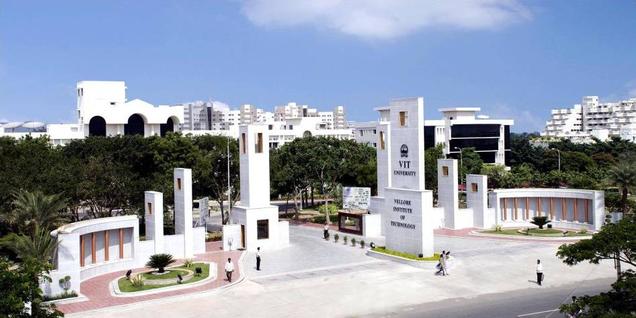 VIT Vellore Campus was established under Section 3 of the University Grants Commission (UGC) Act, 1956, and was founded in 1984 as a self-financing institution called the Vellore Engineering College. The Union Ministry of Human Resources Development conferred University status on Vellore Engineering College in 2001. The University is headed by its founder and Chancellor, Dr. G. Viswanathan, a former Parliamentarian and Minister in the Tamil Nadu Government. In recognition of his service to India in offering world-class education, he was conferred an honorary doctorate by the West Virginia University, USA.

VIT Vellore campus is spread across a vast area of 250-acres. A striking feature of VIT Vellore is the well- planned and comprehensive infrastructure provided for both students and faculty. Fully furnished and well-equipped labs decorate every building in the University with over 55 servers to manage all the data transmissions. Moreover, the university is blessed with ample features that support all kinds of events – Auditoriums, plush open spaces, outdoor stages and much more.

There are seven academic blocks in VIT Vellore which are extremely specialized in their own particular field, namely- MB, GDN, CDMM, SMV, CBMR, TT and SJT. The layout has been excellently planned to make the maximum utilization of the 250-acre campus. ‘Anna Audi’, able to accommodate 1800 students and spread over an area of 15436 sq. feet, it has been built with centralized air conditioners, Wi-fi service and a spectacular stage along with green rooms and a perfect amount of lighting. This auditorium is used for various events and conferences.

VIT Vellore has a number of centres for physical education and sports activities that help the students maintain fitness and develop a competitive spirit. Its numerous outdoor playgrounds and indoor courts are spread over a 20-acre area.

VIT University admits students on the basis of merit through an online entrance exam. VIT organizes its own entrance exam, called the Vellore Institute of Technology Engineering Entrance Examination (VITEEE). It is conducted every year in the month of April and May. In 2015, over two lakh students or two hundred thousand students appeared for the entrance examination. The exam has been conducted online since 2013. The VITEEE has consistently been easier than other engineering entrance exams like JEE Main (formerly AIEEE) and JEE Advanced (formerly IIT-JEE).

VIT University had conducted VITEEE 2017 online from April 5 to April 16, 2017, while the application form of VITEEE 2017 was available from November 9, 2016, onwards. VIT University has also announced the test center-wise dates for VITEEE 2017. VIT University doesn’t declare any cutoff marks for admission to B. Tech. /B.E. programs available at the 4 campuses of Chennai, Vellore, Andhra Pradesh and Bhopal. VITEEE cutoff 2017 can be considered as the closing rank for different branches for which VITEEE 2017 counselling was held in different phases.

For the academic year 2016-17, the candidates in the top merit slab of 1 to 20,000 were called for counselling on different days in the first phase of counselling. Candidates are offered admission to different branches at the two campuses based on their percentile merit. For the academic year 2015-16, a total of 1,84,483 had taken the entrance exam, while seats were allotted to only those candidates who were ranked 99,999 or above.

Given below are the important dates in the VITEEE 2018 event calendar.

There is no separate ranking for extension centers. The ranking of VIT University is the combined ranking for all the campuses.

The VIT Business School was ranked 17 among management schools in India by the National Institutional Ranking Framework in 2017, 77 by Careers360‘s “Top MBA Colleges in India 2017”, 32 among private institutes, and 54 in India by Outlook India‘s “Top 100 Management Schools” of 2016.

The year-wise and branch-wise cut off is listed below:

Given below are the various scholarships that are available to the VIT students based on their academic performance.

Connectivity (How to Reach)

Two main college fests are conducted in VIT: graVITas and Riviera. GRAVITAS is a techfest (technology-oriented festival) conducted in August/September. Riviera is a sports and cultural festival. According to organizers for Riviera 2011, it pulled more than 300 participants from over 20 colleges and universities. Rivera 2013 saw popular names like Shankar-Ehsaan-Loy, Sukhwinder Singh, Chiyaan Vikram, Siddarth, singer Kartik, and many more. ParaMek Technologies from New Delhi conducted a workshop on Automotive Engineering during the fest which was attended by more than 450 students.

Riviera, the annual ISO certified sports and cultural fest of VIT University with all its splendor and eminence is the biggest in South India one that boasts of the biggest entertainers in the Indian entertainment scenario. The fest holds the record for most numbers of people arms wrestling, the biggest number of people to form a human hand. The four-day extravaganza is a celebration of dance, drama, debate, literature while celebrating the plurality abode.

GraVITas is VIT University’s Annual technological and design Carnival. This festival is an endeavor to provide a platform to all individuals to showcase their skills and improve their innovation skills in the fields of technology. The three-day festival sees the participation of students from all across the country and also promotes the exchange of ideas and sparks a collective growth in the development of this nation and its youth.

VIT University has been consistently been setting records and breaking them over the past several years. The latest was with close to 8000 job offers made to our students by Accenture, Wipro, TCS, and Infosys.

VIT has entered into Limca Book of Records thrice for the highest number of campus placements done from a single Institution by a single company:

Here’s a list of some of the notable alumni from VIT.

You can read a similar article on VIT Chennai!