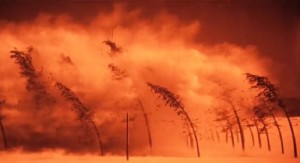 The world as it stands today is a very divided place. There are people with different motives, different goals and aspirations, different outlooks and people going through different kinds of situations. Regardless of all this, we are all united by one thing: the rotation of the Earth. Now what would happen if we lost this unifying force for a while? What if the earth actually stopped spinning?

The Earth spins at a velocity of about 465 meters per second at the equator. If it suddenly stops spinning, everything on the surface of the planet would be flung East at ta 1000 miles per hour on account of their inertia. There will be mess all around and surface of the planet would become graveyard. There would be strong gusts of wind blowing mercilessly, uprooting everything in it’s wake and causing carnage paralleled only by Superman in Man of Steel. The winds would graduate into storms and hurricanes all over the globe. The winds would cause an unprecedented amount of soil erosion, singing the swan song of the flora of our planet. Surface temperature would increase. It would get far hotter than it is now. This would cause uncontrollable fires which would wipe out most of what was immune to inertia and the pleasant breeze caused by the cease of Earth’s rotation.

Magnetic field of the Earth is generated by a dynamo effect that involves its rotation. Protective magnetic field would cease to exist. We would be exposed to ionizing radiations of Sun. Sun will freeze on the sky and we would have 365 days long day. We would get 1/2 year daylight and 1/2 year night. There would be no “Northern Lights”

Tsunami will be kilometres high. Ocean will surge onto land and migrate toward the poles. There will no bulging around the equator which was apparently caused due to rotation of Earth. It would slowly turn into a perfect sphere, which would cause the oceans to flow back down from the poles.

Even after all these catastrophic events, the worst is yet to come. Mankind’s worst nightmare, the one thing human beings dread the most will most certainly come true. We are all rooted to the surface of the Earth due to the balance of the centripeta; force offered by the Earth’s rotation and the gravitational force due to the Earth’s mass. So if the Earth stops rotating, WE WOULD ALL GAIN WEIGHT! Argh the horror! Our weighing scales would read 0.3% more than the present values. Would that put McDonald’s and CrossFit our of business? Hopefully we never have to find out.

Fortunately, we won’t have to. It’s nearly impossible for the Earth to stop spinning, although the rotation is showing signs of slowing down by a very very tiny bit. Nothing major.

You can also check out these references to learn more –