Zero Point Energy, vibrational energy that molecules retain even at the absolute zero of temperature. Temperature in physics has been found to be a measure of the intensity of random molecular motion, and it might be expected that, as the temperature is reduced to absolute zero, all motion ceases and molecules come to rest. In fact, however, the motion corresponding to zero-point energy never vanishes.

Zero Point Energy results from principles of quantum mechanics, the physics of subatomic phenomena. Should the molecules ever come completely to rest, their component atoms would be precisely located and would simultaneously have precisely specified velocities, namely, of value zero. But it is an axiom of quantum mechanics that no object can ever have precise values of position and velocity simultaneously, thus molecules can never come completely to rest.

Physics currently lacks a full theoretical model for understanding zero-point energy; in particular, the discrepancy between theorized and observed vacuum energy is a source of major contention. Physicists Richard Feynman and John Wheeler calculated the zero-point radiation of the vacuum to be an order of magnitude greater than nuclear energy, with a single light bulb containing enough energy to boil all the world’s oceans. 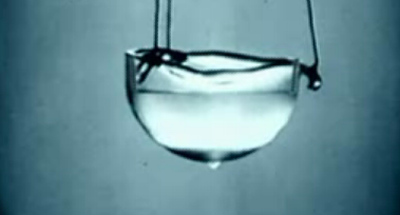 Liquid helium retains kinetic energy and does not freeze regardless of temperature due to Zero Point Energy. When cooled below its Lambda point, it exhibits properties of superfluidity

The basis of zero-point energy is the Heisenberg uncertainty principle, one of the fundamental laws of quantum physics. According to this principle, the more precisely one measures the position of a moving particle, such as an electron, the less exact the best possible measurement of its momentum (mass times velocity) will be, and vice versa. The least possible uncertainty of position times momentum is specified by Planck’s constant, h. A parallel uncertainty exists between measurements involving time and energy. This minimum uncertainty is not due to any correctable flaws in measurement but rather reflects an intrinsic quantum fuzziness in the very nature of energy and matter.

A useful calculational tool in physics is the ideal harmonic oscillator: a hypothetical mass on a perfect spring moving back and forth. The Heisenberg uncertainty principle dictates that such an ideal harmonic oscillator—one small enough to be subject to quantum laws—can never come entirely to rest because that would be a state of exactly zero energy, which is forbidden. In this case, the average minimum energy is one-half h times the frequency, hf/2.

The Origin of Zero Point Energy

The Zero Point Energy is electromagnetic in nature and is like ordinary radio waves, light, X rays, gamma rays, and so forth. Classically, electromagnetic radiation can be pictured as waves flowing through space at the speed of light. The waves are not waves of anything substantive but are ripples in a state of a theoretically defined field. However, these waves do carry energy, and each wave has a specific direction, frequency, and polarization state. This is called a “propagating mode of the electromagnetic field.”

Each mode is subject to the Heisenberg uncertainty principle. This means that each mode is equivalent to a harmonic oscillator. From this analogy, every mode of the field must have hf/2 as its average minimum energy. This is a tiny amount of energy, but the number of modes is enormous and indeed increases as the square of the frequency. The product of the tiny energy per mode times the huge spatial density of modes yields a very high theoretical zero-point energy density per cubic centimeter.

Theoretical work from the 1990s suggests a tantalizing connection between inertia and zero-point energy. When a passenger in an airplane feels pushed against his seat as the airplane accelerates down the runway, or when a driver feels pushed to the left when her car makes a sharp turn to the right, what is doing the pushing? Since the time of English physicist and mathematician Isaac Newton (1642-1727), this pushing feeling has been attributed to an innate property of matter called inertia. In 1994 a process was discovered whereby the zero-point fluctuations could be the source of the push one feels when changing speed or direction, both being forms of acceleration. The zero-point fluctuations could be the underlying cause of inertia. If that is the case, then people are actually sensing the zero-point energy with every move they make. The zero-point energy would be the origin of inertia, hence the cause of mass.

The principle of equivalence would require an analogous connection for gravitation. German-born American physicist Albert Einstein‘s general theory of relativity successfully accounts for the motions of freely falling objects on geodesics (the shortest distance between two points in curved space-time ), but it does not provide a mechanism for generating a reaction force for objects when they are forced to deviate from geodesic tracks. A theoretical study sponsored by the National Aeronautics and Space Administration has demonstrated that an object undergoing acceleration or one held fixed in a gravitational field would both experience the same kind of asymmetric pattern in the zero-point radiation field, the asymmetry yielding the inertia reaction force or weight, respectively. The weight one measures on a scale would be due to zero-point energy.

The possibility that electromagnetic zero-point energy may be involved in the production of inertial and gravitational forces opens the possibility that both inertia and gravitation might someday be controlled and manipulated. Imagine being accelerated from zero to light speed in a fraction of a second without experiencing any devastating G-forces. Such a science fiction-like possibility could someday become real and have a profound impact on propulsion and space travel.