Did you know there are some parasites that live in the intestines of human beings? Yes, sometimes humans and animals suffer from such infestation of worms, called ringworms. These ringworms are a prominent species of Phylum Aschelminthes, also known as pseudocoelomates. Let us learn more about them.

Aschelminths can be free-living or parasitic. The free-living organisms are extremely abundant in soils and sediments and they feed on bacteria. While some others are plant parasites and can cause disease in crops that are economically important. The others are parasites that can be found in animals and human beings.  Some of the parasitic worms include hookworms, pinworms, Guinea worms, and intestinal roundworms.

Ascaris lumbricoides is the Giant Intestinal Roundworm that is an endoparasite living in the human intestine. They are very common in children. These worms cause a disease called ascariasis. Many adult roundworms live inside the intestine, causing obstruction to the intestinal passage. This causes abdominal discomfort, colic-like pain, impaired digestion, diarrhea, and vomiting. Generally, deworming medicines are given to get rid of these roundworms from the body. 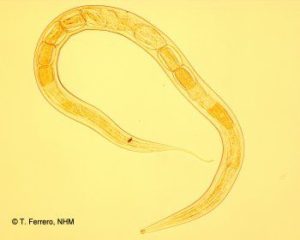 Q: How is the body cavity of an Aschelminth different?

Q: What causes Ascariasis in humans?

Ans: Ascariasis in humans is caused by roundworms and is scientifically known as Ascaris lumbricoides. It is an endoparasite, living in the intestines of humans, causing intestinal obstruction, abdominal pain, and diarrhoea.

Q: What is the scientific name of pinworm?