Have you seen SpongeBob Square Pants? How weird would it sound if it was called Porifera Bob Square Pants?  The creator of this series was a marine biologist who was fascinated with the ocean and used many marine animals, including the Sponges in his animated cartoon series. Read along to find more interesting bits of scientific information about Porifera. This group of animals is probably considered as the oldest animal group. They are also called as Sponges. These are by far the simplest multicellular animals. Even though they are multicellular, they do not have any tissues or organs. Sponges live in an aquatic habitat as they have to have an intimate contact with water. Water plays a major role in the feeding, exchange of gases and as well as excretion.  The body of the sponges has many holes or pores called ostia. The body structure of sponges is designed in such a way that water moves through the body, where it can filter out food and also absorb the dissolved oxygen, along with eliminating waste material.

Organisms belonging to this phylum do not have specialised digestive, nervous or circulatory system. Instead, they have a water transport or canal system, which achieves the functions of digestion, excretion and also an exchange of gases.

Their bodies do not show any symmetry and their shape is adapted so as to allow maximum efficiency of water flow through the central cavity that is present inside.  They generally feed on bacteria and other food particles that are present in the water. Their bodies have a large central cavity called the spongocoel. Water enters through the ostia into the spongocoel and goes out through the osculum. Cells called as Choanocytes or collar cells line up the spongocoel and canals, with their flagellum protruding out. It is the beating of this flagellum from all choanocytes that moves the water all through the body of the sponge. 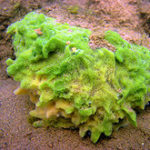 Q: Where are the Choanocytes in Sponges present?

Ans: Cells called Choanocytes or collar cells are present lining the spongocoel and canals. with their flagella protruding out.