In view of the coronavirus pandemic, we are making LIVE CLASSES and VIDEO CLASSES completely FREE to prevent interruption in studies
Biology > Biotechnology: Principles and Processes > Processes of Recombinant DNA Technology

Recombinant DNA (rDNA) technology refers to the process of joining DNA molecules from two different sources and inserting them into a host organism, to generate products for human use. Can you put the DNA molecules in the host organism first and then cut and join them? No! This process involves multiple steps that have to proceed in a specific sequence to generate the desired product. Let’s understand each step in detail.

We already know that the genetic material of all living organisms is ‘nucleic acid’. In most organisms, it is DNA, whereas in some it is RNA. The first step in rDNA technology is to isolate the desired DNA in its pure form i.e. free from other macromolecules.

However, in a normal cell, the DNA not only exists within the cell membrane, but is also present along with other macromolecules such as RNA, polysaccharides, proteins, and lipids. So, how do we break open the cell and obtain DNA that is free from other macromolecules? We can use the following enzymes for specific purposes:

Other macromolecules are removable with other enzymes or treatments. Ultimately, the addition of ethanol causes the DNA to precipitate out as fine threads. This is then spooled out to give purified DNA. 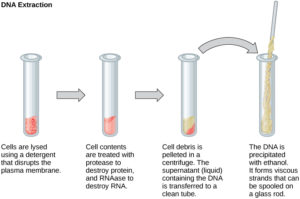 The technique – ‘Agarose Gel Electrophoresis’ reveals the progress of the restriction enzyme digestion. This technique involves running out the DNA on an agarose gel. On the application of current, the negatively charged DNA travels to the positive electrode and is separated out based on size. This allows us to separate and cut out the digested DNA fragments. The vector DNA is also processed using the same procedure. Polymerase Chain Reaction or PCR is a method of making multiple copies of a DNA sequence using the enzyme – DNA polymerase. It helps to amplify a single copy or a few copies of DNA into thousands to millions of copies. PCR reactions are run on ‘thermal cyclers’ using the following components: The cut fragments of DNA can be amplified using PCR and then ligated with the cut vector as explained below.

The purified DNA and the vector of interest are cut with the same restriction enzyme. This gives us the cut fragment of DNA and the cut vector, that is now open. The process of joining these two pieces together using the enzyme ‘DNA ligase’ is ‘ligation’. The resulting DNA is ‘recombinant DNA‘. 5. Insertion of Recombinant DNA Into Host

In this step, the recombinant DNA is introduced into a recipient host cell. This process is ‘Transformation’. Bacterial cells do not accept foreign DNA easily. Therefore, they are treated to make them ‘competent’ to accept new DNA. (The topic – Tools of Biotechnology explains a few ways to make cells competent).

The recombinant DNA multiplies in the host and is expressed as a protein, under optimal conditions. This is now a recombinant protein. Small volumes of cell cultures will not yield a large amount of recombinant protein. Therefore, large-scale production is necessary to generate products that benefit humans. For this purpose, vessels called bioreactors are used.

Bioreactors are large containers with a continuous culture system, where the fresh medium is added from one side and used medium is taken out from another side. Bioreactors can process about 100-1000 litres of cell cultures. A bioreactor provides optimum conditions (temperature, oxygen, pH, vitamins etc.) to biologically convert raw materials into specific proteins, enzymes etc.

‘Stirred-tank bioreactor’ is the most common type of bioreactor. It is usually cylindrical and has the following parts: 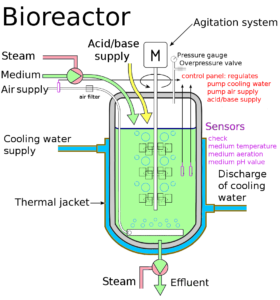 Before the protein is marketed as a final product, it is subjected to downstream processing which includes:

Note: These processes differ from product to product.

Learn more about the Different Techniques in Biotechnology here.

Question: Arrange the steps of recombinant DNA technology in the correct order: