In view of the coronavirus pandemic, we are making LIVE CLASSES and VIDEO CLASSES completely FREE to prevent interruption in studies
Biology > Biotechnology: Principles and Processes > Techniques in Biotechnology

In biotechnology, scientists often need to amplify a small part of DNA or separate out different sized DNA fragments. How do scientists do this? They use specific techniques such as PCR and Gel electrophoresis that allow them to achieve these goals. Let’s learn about these techniques in detail.

In a breakthrough discovery in 1985, Kary B. Mullis invented the Polymerase Chain Reaction (PCR) technique. This technique allows scientists to make millions of copies of a very small amount of DNA. It is based on the natural process of DNA replication that occurs within a cell. Let’s learn about the components and steps of this technique. A PCR reaction needs the following components:

Steps in a PCR Reaction

In a PCR reaction, DNA polymerase synthesizes a new DNA strand complementary to the DNA template by adding nucleotides to the primers. The above components are mixed together in PCR tubes and run on a thermal cycler, where they go through multiple cycles involving the following reactions:

One cycle of denaturation, annealing, and elongation amplifies the double-stranded DNA template to give two pieces of double-stranded DNA. The cycles keep repeating to produce more and more copies, increasing the number of copies exponentially. 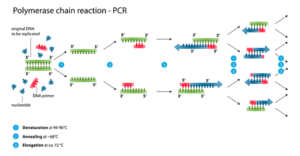 Today, PCR is very important in many fields. In medicine, it is useful to detect genetic mutations and to detect HIV, malaria etc. in clinical samples.

This technique helps to separate DNA, RNA or proteins based on their size. For example, if you want to know the sizes of the DNA fragments after restriction enzyme digestion, you can use this procedure. Here, the DNA is run through a matrix or a gel and separated out. Agarose, a natural polymer from seaweeds is the most commonly used matrix. Let’s understand how this technique works.

The DNA to be separated is added to the wells of an agarose gel matrix. On the application of current, the negatively charged DNA moves to the positive electrode. Since the gel is difficult to move through, the DNA fragments travel at different speeds based on their size. Larger fragments move slower, while smaller fragments fit through the gel pores easily and move faster. 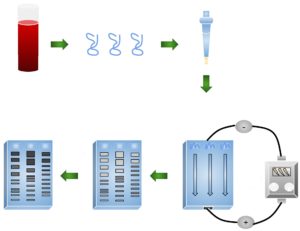 The separated DNA fragments are not visible under normal light. Therefore, they are visualized after staining the bands with a compound – ethidium bromide and exposing them to UV radiation. Once they are stained and exposed to UV light, you can see the separated DNA bands and determine their sizes using a DNA marker. In this way, we can cut out the desired size of DNA fragment, extract it and further ligate it with cloning vectors. The techniques of PCR and gel electrophoresis are crucial in the field of forensics, for genetic fingerprinting and identifying crime suspects.

Question: The process of PCR is based on which natural process within a cell?

Solution: The answer is ‘a’. The basic principle of PCR is replication.