A centriole is a small structure that consists of tubes (microtubules). Besides, it exists as the main trait of the cell wall, which combines tubes in the body. It is a chief unit that forms and tie up in the tubes of the cell.

Normally, a eukaryotic cell has one centriole that is at the right angle to a second centriole in the cell wall. Tubes grab each and every centriole and use it as a grapple for the base of every tube.

Every cell may have hundreds or thousands of tubes that stretch out to different pieces. During the usual cell functions, motor proteins attach to both the tubes and with the items that they transport.

Also, the motor proteins get along the tubes to carry whatever substance with them. Not all cells contain centrioles, and there are different methods for creating tubes.

The cell has a compound endoskeleton of tubes. These allow the substance to transport from one location to another. Also, the resulting product tags with special glycoproteins (Like sugar and protein). And acts as an indicator of specific motor proteins.

Furthermore, the centrioles grab the tubes that spread from it. And comprise the factors that they need to produce more tubules.

During mitosis, cell walls are reproduced by copying every centriole. The 4 centrioles at that point separate into two cell walls. Moreover, each with one centriole at a correct edge to the subsequent centriole.

Tubes reach out between the cell walls which push the arrangements of centrioles separated. The centrioles will be driven separated, to furthest edges of the cell.

When built up, every centriole will at that point broaden tubes into the cytoplasm that search out chromosomes. The tubes connect to the chromosomes at their centromeres, which are portions of the DNA uncommonly defined to permit the connection of exceptional proteins and tubes. 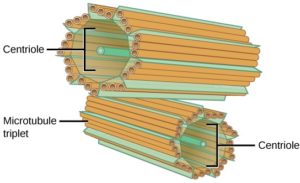 It forms by nine arrangements of tubes. Furthermore, each in an arrangement of three tubes that we know as triplet tubes. Triplet tubes are exceptionally solid since they form by three concentric rings of tubes that structure together.

We can see triplet tubes in other solid tubes structures. For example, the basal assortments of cilia and flagella. Every triplet joins together by unique proteins that give it the shape.

Surrounding the triplet tubes is an in-definite material that we know as pericentriolar material. This material contains a significant number of atoms important for the development of tubes.

Every tube in a triplet consists of little units of tubulin, a little monomer. These combine to make long, empty cylinders that take after straws.

Q. What is a centriole?

B. Small cell membrane made of microfilaments inside animal cells that are part of flagella, cilia and mitosis

C. Small cell membrane made of microfilaments inside plant cells that are part of flagella, cilia and mitosis

D. A small cell membrane made of microfilaments inside animals that are part of flagella, cilia and mitosis

Ans. The correct answer is A.

Explanation: It forms by tubes. Also, it exists as a major aspect of the cell wall, which composes tubes in the body.