We all have studied what a cell is and what are its different parts. Thus, you must be familiar with the term cytoplasm function. Moreover, it is quite an important aspect of a cell.

It is important to understand the structure and function of cytoplasm in order to fully understand the cell. Thus, we will further discuss all this element along with a diagram to explain it better. 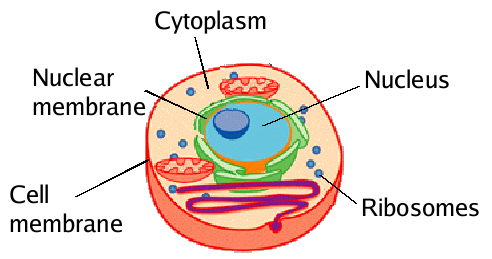 A cell contains a fluid which fills it up, that experts call as the cytoplasm of the cell. It consists of the cytosol with filaments, ions, proteins, and macromolecular structures. In addition, there are other organelles which are suspended in the cytosol.

However, in contrast to the traditional definition, we have modern studies stating that the older one is not valid. In other words, while it was said to be a fluid-like substance, it is now said to be similar to glass-forming liquids.

Further, we can say that there are two states in which cytoplasm exists. One is sol (plasmasol) and the other is gel (plasma gel).

Sol is a colloidal solution in liquid form where the particles are distributed in the water. Further, there is gel which is a thick and semi-solid colloidal system.

A cell has various cell organelles in which numerous structures exist. Each of these structures is unique and carries out particular functions. There are three main elements of a cell which are the plasma membrane, cytoplasm, and the nucleus.

The plasma membrane or the cell membrane is bi-lipid in nature which is a membranous layer. What it does is that it parts the cell organelles from its outside surroundings and also from the diverse cells. Thus, the external covering of a cell comprises of various parts which include the cytoplasm and the nucleus.

After that, we have the nucleus which is the biggest organelle. Finally, we have the cytoplasm which resembles a jelly where implantation of the cell organelles takes place. In other words, it is quite a basic constituent of the cell.

It is responsible for attaching the nucleus and the membrane of the cell. Furthermore, the other cell organelles like ribosomes, mitochondria, vacuoles, endoplasmic reticulum, are suspended in it.

The cytoplasm has a number of functions to perform so the cell can function smoothly. A major one is that it enables cells to preserve their turgidity. This, in turn, helps the cell to maintain their shape. Moreover, it also aids activities related to metabolism.

Furthermore, it also assists in the breaking down of the waste material. It is so because it comprises of molecules enzymes which are important for this process. It is a hub for many other activities as well.

Moreover, the maintenance of the shape of the cell is by it only. The filling up allows the organelles to stay in their position. That is why, if a cell does not have cytoplasm, it will surely deflate and permeation of substances won’t take place easily from one organelle to another.

In addition, we see that it also has the mechanism to quickly disperse nutrients, enzymes, and metabolites. This dispersion is due to the process of cyclosis. Other than that, it also stores raw materials for the metabolism as well as the operation of the various cell organelles.

Question– Which of the following is not included in the cytoplasm?

Answer– The correct answer is option C. The cell membrane is outside the cytoplasm, the other constituents are inside it.