Cells are the building blocks of life. Whether it is a single-cell organism or a multicellular one. But to keep life going, cells must multiply, to heal or reproduce. The two main ways of cell division are Mitosis and Meiosis. Read below to have a complete idea of the processes of meiosis vs mitosis.

In the cell cycle, mitosis is a process, in which a cell split into two new cells. Further, during the process, its DNA replicates. 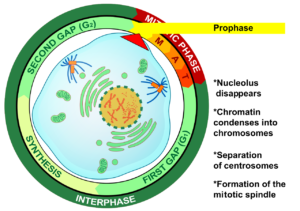 In single-cell Eukaryotes, mitosis is the basis of asexual reproduction. And in multi-cell Eukaryotes, the zygote form after conception transforms into a fully formed organism via mitosis. Mitosis takes place in several stages after the replication of DNA. Besides, the stages are mentioned below.

Functions of Meiosis vs Mitosis

In mitosis, development is the primary function. In multi-celled Eukaryotes, the male and female gametes combine to form the zygote- the building block of a new life. However, to grow and develop, the zygote needs more cells. This is where mitosis comes in.

In addition, the zygote multiplies from one to two, to four, and so on. Once there is a sufficient mass of cells to create a hollow ball (blastula), it folds in to expand exponentially. After a point, specialised cells begin to form for specific tasks.

And soon a complete organism forms and is ready to be born. In single-celled haploid Eukaryotes, there is only one copy of DNA. Moreover, the parent cell duplicates and distributes their DNA. They do it by the process of mitosis in the form of asexual reproduction.

Mitosis also helps to repair an organism when its body is hurt and its cells take damage. The damaged tissue, from physical or environmental injuries, repairs itself by replacing the damaged cells.

Also, the neighbouring cells close to the area of damage engage in mitosis to complete the replacement. While in most cases it is only small injuries that can be fixed this way. While some animals like lizards can regenerate entire body parts (like the tail) through mitosis.

Meiosis vs Mitosis: Phases of Mitosis

Not technically a ‘phase’ of Mitosis, but it is the interphase of the cell cycle. It causes a cell to grow and synthesize an identical set of DNA, thereafter allowing the cell to enter Mitosis. Interphase is well-thought-out as the initial and ending points of a mitosis cycle.

It is the first phase of mitosis, the DNA is condensed from the loose state (chromatin). The chromatin, during Prophase, gets packaged tightly by special proteins called histones. Centrioles appear on the two sides of the cell.

And it prepares to reach out and pull apart the genes of DNA. In animal cells, the nucleus of the cell is naturally in the centre. However, in the case of plants, it is often delineated and must be centred just before the Prophase.

The Prometaphase prepares the duplicated genes to split apart with the help of the microtubules. It induces the nuclear envelope around the cell to split. Microtubules from each side of the cell extend from the centromeres to the genes and attach to the kinetochore.

The microtubules from either side start pulling on the chromosome with equal force. Also, they pull it till the genes end up in the middle of a cell. This area is known as the ‘metaphase plate’. Here, the two chromatids are lined up against their clones.

They are linked in a way that when the chromosome is pulled apart. And each resultant cell possesses a complete functional genome.

The proteins, thus far connecting the two chromatids at the centromere, are disintegrated. The two individual genes are identical halves and can be pulled to the developing cells.

It is the final phase of mitosis. In it, the genes pulled to the two ends of the parent cell towards the centrioles. In the cell, it forms a ‘cleavage furrow’. Following this, a nuclear envelope will start to form around the genes once again, and the centrioles will disintegrate. The result will be two new and complete cells. 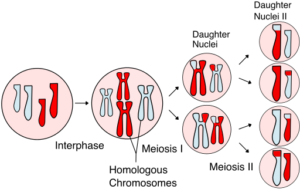 Sexually reproducing Eukaryotic organisms reduce the number of genes in the cells (specifically the gametes, i.e. the sperm and the egg) before reproduction. We know this process by the name of  Meiosis.

Meiosis is necessary as it ensures that the number of genes in the resultant offspring is uniform to that of the parents. During fertilisation, the male and female gametes fuse together to create a zygote.

It is essential that the number of alleles in each gamete is halved through meiosis so the resultant gamete can end up with two genes it should have. If it did not happen then the resultant offspring would end up with four copies of each gene after reproduction, a situation known as polyploidy.

While it usually leads to fatal developmental defects, for certain organisms, it is quite a normal occurrence and they can survive with it.

Meiosis Vs Mitosis: Phases of Meiosis

Meiosis undergoes two distinct stages of division, each with its own different phases. As in mitosis, the DNA of the diploid cells is first replicated (i.e. there are two full sets of DNA, each with two alleles), and then the two stages- Meiosis 1 and Meiosis 2 occur. The initial step of Meiosis 1 is  Prophase 1, which takes place in a similar manner to Prophase in Mitosis. The genes get dense and move towards the central portion of the cell. The nuclear membrane disintegrates, and the microtubules on either side of the cell.

Further, they attach the kinetochores of each chromosome to the centrioles. The only difference here with mitosis is that the genes pair up homologously.

The two homologous pairs of genes align on the metaphase plate along the central portion of the cell in preparation for ‘reductional division’. This is the stage that forms the basis behind the ‘Law of Segregation’. Since while the alleles are lined up against the metaphase plate, there is no order of alignment of maternal and paternal plates.

As a result, each allele has an equal chance of passing on to the offspring.  Also, the ‘crossing over’ that happens in this stage when the homologous genes exchange their similar parts forms the basis of the ‘Law of Independent Assortment’.

It is similar to Anaphase. During Mitosis, the centrioles pull apart the genes. Also, it only separates the homologous genes instead of the sister chromatids.

After complete separation, a new nuclear membrane starts to develop. Cytokinesis also ensures that the plasma membrane is separate. Therefore, leading to the creation of two new haploid cells. This creation will rest and then enter into Meiosis 2. It happens in the same way as Prophase 1.

Here, the phase is similar to Metaphase in the case of Mitosis. With one chromatid on either side of the metaphase plate, the genes line up their centromeres (still attached through the Cohesin protein).

In this, the sister chromatids divide and form separate genes.  Also, the centrioles on the two poles of the cell pull them towards it. This is the final stage of the division of DNA, that we know as ‘equational division’. After this each cell will now have the same number of genes, but with no copies.

Similar to Telophase 1, and the two new cells develope- with their individual genes with their nuclear envelopes, and plasma. With the conclusion of Meiosis 2, there are four haploid cells with a single copy of the genome each. Thereafter, the cells develop into the male and female gametes, i.e. the sperm and the ova.

Q. When does Reductional Division occur?

Ans. The correct answer is option C (Metaphase 1). The two homologous pairs of genes align on the metaphase plate. During Metaphase I of Meiosis, along the central portion of the cell in preparation for ‘reductional division’.