The glial cells are a collective of cells. Their main function is to protect and maintain the optimum functioning of your nervous system. These cells are commonly called glia or neuroglia.

Though they are not the most easily recognisable part of our body. But, they sure are essential for our day-to-day functioning.

Without this trusty group to support the CNS, many things would be impossible. In other words, we would not even be able to walk, talk or eat properly!

However, it is important to remember that the neuroglia is a distinct kind of cell in itself. And, they only support the neurons.

The Neuroglia are a group of supportive cells for the neurons. Further, they maintain the myelin sheath, provide nutrient support. Moreover, they also retain homeostasis. It is within the CNS and PNS. 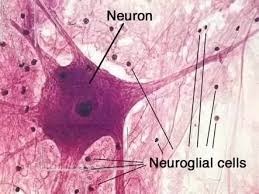 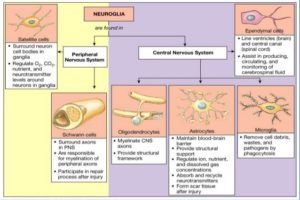 Types of  Glial cells and Their Functions

The glial cells, or neuroglia, can be broadly categorised into two variants:

The microglia are phagocytic cells. They engulf pathogens. Thus, serve a defensive role within the nervous system.

Further, it has flexible shapes. Its form tends to keep changing. Mainly after it has engulfed a foreign body. They are present throughout the brain and spinal cord.

The macroglia are the larger neuroglia present in the nervous system. Moreover, they may be further divided into 7 variants. Based on their function and location:

The Astrocytes get their name from ‘Astro’, meaning ‘star’, and ‘cyte’, meaning ‘cell’. Thus, they are star-shaped cells found in the CNS. They provide structural integrity. They fill up the spaces between neurons.

Moreover, they also have tiny little ‘feet’ called the ‘perivascular endfeet’. They wind around the blood vessels. Ones that constitute the blood-brain barrier.

This barrier protects the brain.  It blocks any undesirable substances from entering via the vasculature. Further, the astrocytes also conduct the metabolite exchange. It is between the neurons and blood vessels.

The oligodendrocytes are glial cells present in the CNS.  Further, they help in the making of the myelin sheath. The sheath that encases the axons of neurons.

The ependymal cells are of three variants. Thus, they are ependymocytes, tanycytes, and choroidal epithelial cells.

Similarly, these cells are a part of the CNS.  They deal with aspects of the cerebrospinal fluid (CSF).

The ependymocytes promote the free movement of molecules. It does so between the neurons and the cerebrospinal fluid.

Further, the tanycytes respond to alterations in the hormonal levels. It does within the blood-derived hormones.

Moreover, the choroidal epithelial cells control the chemical composition of the cerebrospinal fluid.

The radial glial cells are found in the CNS. They provide a temporary support structure. They do so for new neurons to latch on to.

The Schwann Cells are like a counterpart to the oligodendrocytes. But, they are present in the PNS instead. Just like them, the Schwann cells also help in the making of the myelin sheath.

Additionally, these cells are also phagocytes. They engulf foreign particulate matter. They do so to protect the system.

The satellite cells are found in the PNS. Further, they are found surrounding the nerve cells. The nerve cells of the sensory system and the autonomic system.

Further, the main function of the satellite cells is to maintain a stable chemical environment. It is done around the neurons.

They are a part of the PNS. They are found in the gastrointestinal tract. Thus, they help in digestion. It also helps in homeostasis. 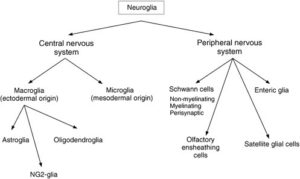 Q: What is the main role of the Oligodendrocytes?

Solution: The correct option is ‘b’. It is in the making of the myelin sheath that covers the axons of neurons.