Just like all other systems in our bodies malfunction so does the malfunction. It is in fact estimated that nearly 17% of the urban population in India is suffering from some form of kidney disease, such as kidney stones, kidney failure etc. Let us take a look at the various disorders of the excretory system.

Common Disorders of the Excretory System

All living organisms consume food to generate energy that allows them to perform their biological processes. At the same time, they have certain by-products that are generated during these processes and these need to be expelled. This is known as excretion. In the human body, a specialized system is present, known as the excretory system.

Also called renal calculi, these are formed by the accumulation of calcium or uric acid crystals within the kidneys. They tend to separate out of the urine and remain within the kidneys. There can be many causes of these stones such as infections, excessive calcium consumption or reduced elimination, and reduced water intake.

Kidney stones can cause many symptoms ranging from colic pain, back and abdominal cramps, nausea, and vomiting. Their treatment ranges from electrolyte balance, medicines to surgery depending on their number and size.

There can be many reasons for kidney failure such as damaged tubules, diabetes that has cardiac effects, kidney stones, chronic drug intake to name a few. Kidney failure can be of two types: acute and chronic.

Acute renal failure is the term given to kidney failure when it occurs all of a sudden. Chronic kidney failure is when the kidney functioning reduced gradually over a period of time. Treatment options for kidney failure range from electrolyte therapy, antihypertensive drugs, dialysis and kidney transplant surgery.

This is a condition characterized by the inflammation of the urethra. The urethra is a tube that extends from the urinary bladder to help expel urine out of the body. It is longer in the males and shorter in females. It is most commonly caused by bacteria either through sexual intercourse or from non- sexual sources.

Symptoms include burning sensation on passing urine, frequent urination, pain in the abdomen before and after passing urine. It is quite commonly seen in sexually active individuals. Treatment includes a course of antibiotics and alkaline syrups to neutralize the acidity of urine that causes the burning sensation. 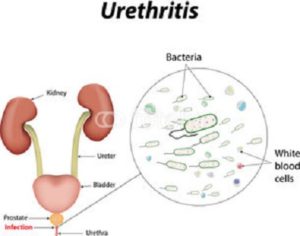 This condition is characterized by the increase in the blood urea levels. This occurs because the kidneys are unable to eliminate urea which leads to its accumulation and increased levels in the blood. Dialysis is a treatment modality for correcting this condition while correcting the cause that led to uremia.

This is a condition characterized by no passage of urine. There can be multiple treatment options but increasing the fluid and electrolyte intake is the primary one.

It is a term given to excessive or frequent passage of urine. This occurs when the kidneys are unable to filter and reabsorb the water from the urine. It is a symptom seen in many underlying body conditions such as diabetes mellitus and diabetes insipidus.

Q: Which part of the excretory system is responsible for expelling urine out of the body?

Sol: (d) Urethra. The Ureters are tubes that help urine to move from the kidneys into the urinary bladder where it is stored till the urethra expells it from the body. The ureters are two in number whereas the urethra is single. The urethra is longer in males and shorter in females.