Firstly, the ovule is a structure of a plant that develops into a seed during the fertilization process. A mature one contains food tissue, one or two future seed coats cover it, and we call them integuments.

A small opening present in the integuments lets the pollen tube to enter and discharge its sperm nuclei into the embryo sac.

Moreover, a large oval cell in which the development and the fertilization occurs. However, each of the these has an attachment between its base and the stalk i.e. funiculus that bears it.

In the seed plants, the ovule is a structure rise and consists of the female reproductive cells. It has 3 parts: The integument, it forms its outer layer that we call a nucleus and also a remnant of the megasporangium. 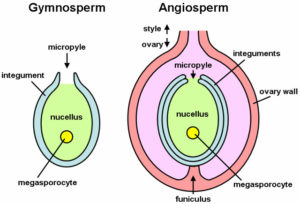 Parts and Development of Ovule

Ovule orientation might be anatropous like when inverted the micropyle faces the placenta, campylotropous, amphitropous or orthotropous. It appears to be a megasporangium with the integuments that surrounds it.

Moreover, they are generally composed of the diploid maternal tissue that involves a megasporocyte.

The megaspores remain in them and divide by the mitosis for producing the haploid female gametophyte or megagametophyte that also stays inside them.

The remnants of the megasporangium tissue are surrounding the gametophyte.

The gametophytes produce archegonia and these produce the egg cells. After the fertilization process, it has a diploid zygote and then after the division of the cell starts. Finally, an embryo of the sporophyte starts generating.

In the flowering plants, a second sperm nucleus fuses with other nuclei in the megagametophyte that forms a typically polypoid endosperm tissue. In addition, it serves as nourishment to the young sporophyte.

It plays an important role in the process of sexual reproduction. Once a pollen grain falls on the stigma of a flower of its similar species.

In addition, it sends out a pollen tube below through the style. Then this tube enters inside the ovary and then reaches into the ovule of the plant.

Once that occurs, the fertilization process can arise as the nucleus of the pollen grain is brought down of the tube for merging with the nucleus in the embryo sac.

Notably, the male alternative of it is generally pollen. It contains the male gametophytes.

However, the point where the funicle and the body attach is hilum. Many times funicle gets fused with the body of the ovule one side and makes a ridge that we call as a raphe.

The body of the ovule has 2 ends that are the basal end and the other one is the upper end we also call micropylar end.

Ques. The male gametophyte of angiosperms is shed as:

Getting to Know Plants

Getting to Know Plants