Have you ever wondered what life would be without the sense of touch, vision, smell, hearing etc.? Quite boring, I would say.  Our sense organs have an important role to play in our life. Our perception of things around is due to our sensory perception, which occurs due to the presence of sensory receptors. The sensory receptors are the sense organs such as eyes, ears, nose, tongue, skin.

Table of content
1 Suggested Videos
2 Role of the Sensory Receptors
2.1 Browse more Topics under Neural Control And Coordination
3 Eye
3.1 Parts of the Eye
4 Ear
5 Solved Questions For You

Role of the Sensory Receptors

It is due to these sensory receptors that we are able to detect changes in the environment and send the stimulus to the central nervous system. They mainly consist of numerous sense cells, sensory neurons, and accessory structures. Let us take a more detailed look at the eye and the ear.

It is the sensory organ of vision. The pair of human eyes are located in the orbits or sockets of the skull. There are different parts of an eye that has a specific function. Let us take a look.

Parts of the Eye 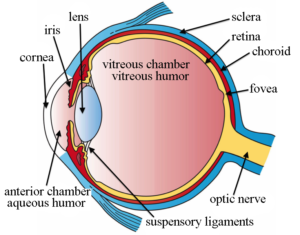 The eyeball has an outer tough white layer called the sclera, which has dense connective tissue. The sclera has a transparent front part called the cornea. And light enters the eye through the cornea. There is a middle layer called the choroid that contains blood vessels. This choroid layer is thin over the posterior two-thirds of the eyeball. Then it becomes thick and forms the ciliary body, in the anterior part.

The iris is a muscular tissue and ring-like structure. It is the colored area of the eye and controls the amount of light that enters the eye. The iris color is what gives the color to the eye. It has a small opening called the pupil, which controls the amount of light entering the eye. The muscle fibers of the iris regulate the diameter of the pupil. The pupil dilates or constricts according to the changes in light in the immediate surroundings.

Behind the pupil is the lens, which is a transparent structure. This lens changes its shape to focus the light onto the retina of the eye. The ciliary muscles act on the lens making it thicker to focus on the nearby objects and likewise, thinner, to focus on far away objects. The retina of the eyes is a light-sensitive layer. It contains photoreceptor cells and blood vessels. This retina converts the images formed by the lens into electrical impulses. With the help of the optic nerves, the electrical impulses are transmitted to the brain.

The photoreceptor cells of the retina are the rods and cones. The rods are responsible for the night vision and side vision. The rods are more in number than cones and much more sensitive to light. The cones are responsible for the detailed, colored and sharp vision that is central. Each of the photoreceptor cells is linked to a nerve fibre. All these nerve fibres bundled together form the optic nerve.

It is an organ responsible for maintaining the body balance and the auditory sense of hearing. The human ear consists of three parts. These are the outer ear, middle ear, and the inner ear. The outer ear is made up of the pinna and the ear canal. The eardrum and the three ossicles make up the middle ear. The inner ear has the semicircular canals which are connected to the cochlea. 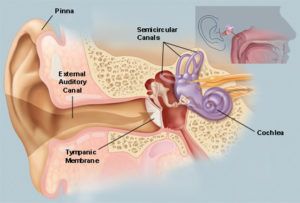 The external ear collects the sound waves and channels it through the ear canal to reach the eardrum. The eardrum vibrates and relaxes according to the amplitude of compression of air. The sound waves then reach the middle ear. Then the ossicles of the middle ear namely, malleus, incus, and stapes increase the efficiency of the transmission of sound waves to the inner ear.

The sound vibrations are then passed to the fluid of the cochlea, thereby generating waves and getting electrical signals out of the cochlea. From here, the signals are sent to the brain through the auditory nerve. Once the brain gets these electrical impulses, it detects sound.

Q: Choose the right option. The colored area of the eye is

Ans. The correct option is “C”. Iris is the colored part of the eye. It has pigmentation and determines the color of our eyes.