Parasitism is relationship between two different organisms of different species in which one organism gets benefits & other gets harmed or sometimes killed.

One organism derives its nourishment from the other and the organism might get severe diseases or becomes weak. Moreover, parasitism includes various parasites which either complete their whole life cycle dependent on the host or are only dependent in some stages of their life cycle. 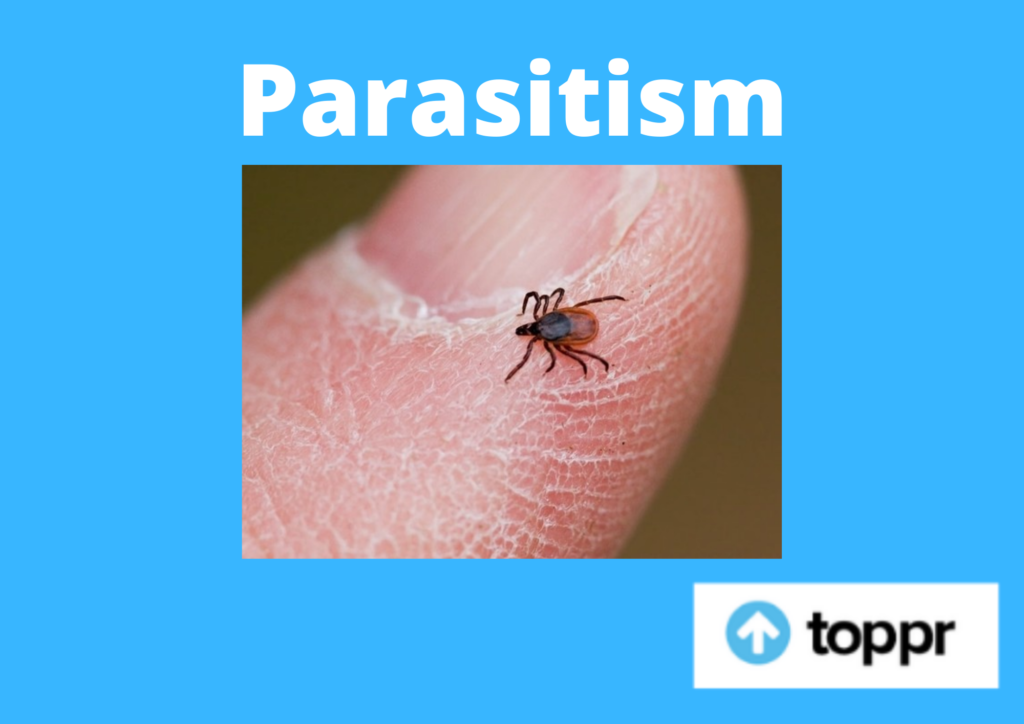 The organism which lives on or inside of the other organism is a parasite.

The organism on which the parasite lives and causes harm is a host. Parasites live on the living host, unlike saprophytes which live on dead organisms.

There are different forms of parasitism which include a variety of parasites living on different hosts for their nutrition. Such as-

They have evolved many parasitic stages to ruin the host. In case the obligate parasite does not find a suitable host it might not be able to reproduce.

An example of obligate parasitism includes a virus. A virus cannot survive without any suitable living host and will not be able to reproduce. The virus enters the body of the host and starts the production of its proteins. And it replicates inside the host body. Another example of an obligate parasite is head lice. If it is removed off from the scalp then it would rather die.

The parasites that do not completely depend upon the host for completion of their life cycle are obligate parasites.

They are not always in parasitic mode, but only show parasitism in certain stages.

Facultative parasites include plants, fungi, animals, and some microorganisms.

Naegleria fowleri is a free-living amoeba, who sometimes infects humans.

Another example of facultative parasitism is Armillaria also known as honey fungus. They cause “white rot” disease. Armillaria does not completely depend upon its host tree but can still live over dead woods.

In ectoparasitism, the parasite lives outside the host’s body.

The parasites which live inside of the host’s body are the endoparasites. These are of two types-

The parasites which are present inside the cells of their hosts are intracellular.

Some examples of organisms showing intracellular parasitism are Plasmodium which causes malaria.

Parasites that are present in the spaces between the cells or in other organs of the host’s body are intercellular.

Examples: Some examples of organisms showing intercellular parasitism are:

The parasites who live inside the body of the host only at certain stages of the lifecycle are mesoparasites. Further, it usually enters the host body through body openings.

Cymothoa exigua is an example of mesoparasite which enters the fish through its gills and gets attached to the fish’s tongue.

In this type of parasitism, some organisms like ants of different species coexist in a single colony and one of its species is parasitic which depends upon the other species, the host. For instance, if a species of ant is a parasite on others it might become dependent on it and wouldn’t survive in its host’s absence.

Some organisms depend upon other organisms for the nourishment and nurturing of their young ones. This type of parasitism occurs in birds, fishes, and insects.

The most common example of brood parasitism is in Cuckoo. The cuckoo lays its eggs inside the nests of other birds which further nourish its eggs and the offspring. Moreover, a cuckoo catfish lays its eggs among the eggs of cichlids. The parasite species can sometimes smack out the eggs of host species to place their own. Further, they benefit as now they don’t have to spend their time and energy in the nurturing of their young ones.

A protozoan living on a flea that itself is a parasite on the dog.

These are a flat, segmented worm that lives inside the human intestine. Consequently, there it absorbs nutrition and lays eggs. A tapeworm can enter the human body by infectious water or through contaminated food that contains its eggs or larval forms.

These parasites are also found in human intestines where it feeds on the blood. The infection caused by them is helminthiasis. Moreover, people in areas with poor hygiene and sanitation can easily catch these worms. This infection can easily transmit through infected pets. One can prevent this by maintaining proper hygiene.

Liver flukes are the worms that travel to the liver of humans where they live and reproduce. Further, it causes by contaminated or undercooked freshwater foods like fish. To prevent the infection, one must be sure to wash and cook the fish thoroughly.

The infection is common in rural areas. Moreover, it gets spread by the contaminated undercooked meat which has larvae of trichinella. The larvae grow inside the intestine of humans.

It is a parasitic infection that Entamoeba histolytica causes which is protozoa. Further, it gets transmitted by contaminated feces or by poor hygiene conditions. In addition, the prevention of this includes proper sanitation.

The causative agent is the parasite trypanosome of the genus Leishmania. Moreover, it spreads by the bites of sandflies. More than 20 species of Leishmania cause infection in humans. However, to prevent this infection you must get rid of insects by spraying insecticides or using insect nets.

The causative agent of this disease is roundworms Ascaris lumbricoides. Moreover, it is an intestinal infection. Also, it spreads through contaminated food, soil, and water. Ascariasis is highly common in children of 10 years or younger. Moreover, it is high in the hot and humid climate. Further, the main cause is the lack of sanitation. Some common symptoms of parasitic infections are-

Question 1- What is parasitism and its examples?

Answer2– Parasitism is the relationship between two organisms of different species in which one benefits whereas the other receives harm. Further, examples of parasites include worms of intestines, fungi, and protozoans.

Answer2- Yes, viruses are the intracellular parasites that live in the body of the host. Moreover, it turns out that there they start their protein synthesis and replicates with causing harm to it.

Question 3- How to treat parasitic infections?

Question 4- What is the difference between parasitism and symbiosis?

Answer 4- Symbiosis is a mutual relationship between different organisms. Further, it can be mutualistic, commensalism, or parasitic. On the other hand, parasitism is a part of symbiosis in which one of the organisms involved benefits. Alternatively, the other gets harmed like in the case of worms and humans.