When new individuals form from the cells of a single parent, then this mode of reproduction is called asexual reproduction. Here the offspring that is produced is identical and are copies of the parent. These similar looking individual, both genetically and morphologically are called clones.

Asexual reproduction is quite commonly resent in different living organisms. It is seen in both plants and animals. It is common in the case of single-celled organisms. The lower order of animals and plants show this mode of reproduction, which has a simple body organization.

Here, a single parent is involved, without the involvement of the fertilization process. There is a rapid multiplication and growth that is seen, occurring in a small period of time. The offspring are genetically similar.

Asexual reproduction can occur in various modes. These are discussed below. 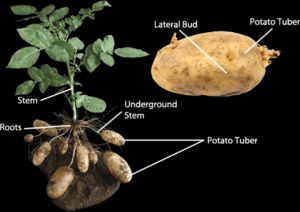 In some plants, new plantlets generally arise from the nodes. When the nodes come in contact with water, they give rise to nodes, thereby resulting in a new plant. In Bryophyllum, adventitious buds arise from the leaves. They originate from the notches present on the leave, slowly giving rise to new plants.

Learn more about Sexual Reproduction in Plants and Animals here.

Q: One of the following is not an advantage of asexual reproduction. Choose the right answer.