The central dogma of molecular biology is as follows:

Firstly, if both DNA strands act as templates, it will result in two different RNA sequences and in turn give rise to two different proteins. This complicates the transfer of genetic information. Secondly, the two RNA sequences produced will be complementary to each other and produce a double-stranded RNA. This will prevent RNA from being translated into protein. Now, let’s look at the different regions of a transcription unit in DNA.

The two DNA strands within the structural gene have different names. Since RNA polymerase catalyzes polymerization in only one direction 5′ → 3′, the strand with 3′ → 5′ polarity becomes the template strand. The other strand with 5′  → 3′ polarity is displaced during transcription and is called the coding strand even though it does not code for anything. In a transcription unit, the promoter and terminator regions lie on either side of the structural gene.

It is a DNA sequence located towards the 5′ end (upstream) of the coding strand. It is the binding site for RNA polymerase and is the site that tells the polymerase to start transcription. Additionally, the presence of the promoter defines the template and coding strand in a transcription unit.

It is a DNA sequence located towards the 3′ end (downstream) of the coding strand. It provides the stop signal and defines the end of transcription. Additional regulatory sequences may be present upstream or downstream of the promoter.

The functional unit of inheritance is a gene. Although genes are located on DNA, it is difficult to define a gene in terms of DNA sequence. A DNA sequence that codes for tRNA (transfer RNA) or rRNA (ribosomal RNA) is also a gene.

A cistron is a segment of DNA that codes for a polypeptide (a polymer of amino acids). A cistron can be polycistronic (mostly in prokaryotes and bacteria), i.e. it can code for several proteins. It can also be monocistronic (mostly in eukaryotes) i.e. it codes for a single protein. The monocistronic genes in eukaryotes consist of coding sequences called exons and intervening sequences called introns. Exons appear in mature or processed RNA whereas introns do not.

There are three major types of RNAs in bacteria:

The Process Of Transcription

Transcription has the following steps: 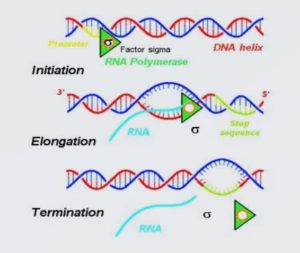 In bacteria, since the mRNA does not need to be processed and since transcription and translation occur in the same cell compartment, the two processes can occur simultaneously. Also, the RNA Polymerase catalyzes transcription of all kinds of RNA. Eukaryotes, however, differ and show two main complexities. There are 3 types of RNA polymerases –

The primary transcript in eukaryotes is non-functional since it contains exons and introns. It undergoes splicing, a process that removes introns and joins the exons together in a specific order. The precursor hnRNA undergoes additional processing called capping and tailing. 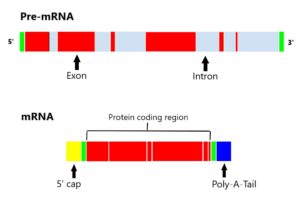 Sol: The answer is 5′-UACGUACGUACGUA-3′. RNA has the same sequence as the coding strand, except in place of thymine it has uracil.