Ammonium bromide (NH4Br) is the ammonium salt of hydrobromic acid. The chemical matures in prisms that are colorless, owning a salty taste. It sublimes when heated and is very easily soluble in the water. On exposure to the air, it slowly assumes a color because of the oxidation of traces of the bromide (Br−) to the bromine (Br2) and the color assumed by this is yellow. In a simple language, the ammonium bromide is the odorless crystals that are white in color or the granules which turn into yellow color when exposed with air. The ammonium bromide formula stays stable under the recommended storage conditions that have a set temperature according to the need of the ammonium bromide.

Ammonium Bromide is generally an ammonium salt that is formed when an ammonium ion reacts with bromide ion in a ratio of 1:1.

The structural representation of Ammonium Bromide is provided below: 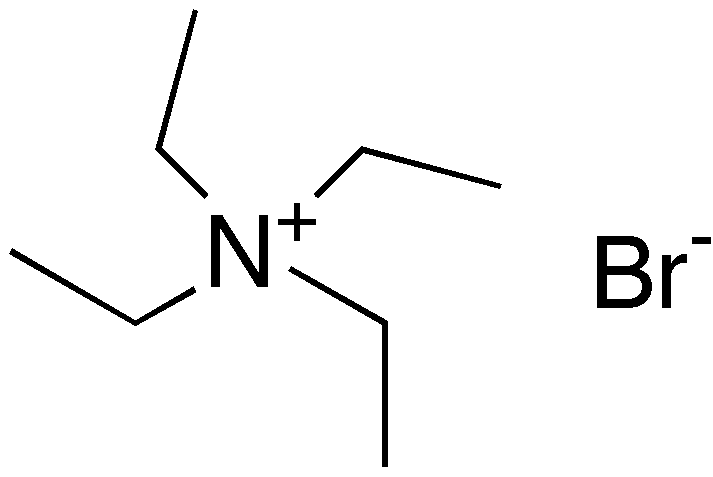 The Ammonium bromide gets decomposed to the ammonia and hydrogen bromide when it gets heated at raised temperature levels.

Ammonium Bromide is useful for the purpose of photography in the films, plates, and papers, in fireproofing of the wooden elements, in the lithography and the process inscription, in the corrosion inhibitors, and in many pharmaceutical preparations done in the labs during the experiments.

Ammonium Bromide is also used in combination with an appropriate oxidizer and it is an efficient biocide that is applied in various water systems in the industrial sector and wastewater to control bacteria, fungi, and the algae.

Question: What reaction occurs when we dissolve NH4Br in the water?

Solution: NH4Br is the salt of a weak base, NH4OH and a strong acid HBr at the same time, Thus, the NH4+ will hydrolyze as given below: