The ammonium hydroxide is also known as the Aqua Ammonia, solution of the ammonia gas inside the water, and also a common commercial form of ammonia. It is a liquid that has no color and has a strong characteristic odor. In the concentrated form, ammonium hydroxide can result in burns on coming in contact with the skin. Moreover, with the ordinary household ammonia, useful as a cleanser, is dilute ammonium hydroxide. The water solution is basically represented by the formula i.e. NH4OH, though no appreciable amount of the molecular species NH4OH is present over there. The solution consists primarily of large amounts of water (H2O) and ammonia (NH3) and smaller amounts of the ammonium ion, NH4+, and the hydroxide ion, OH–. Let’s study about Ammonium Hydroxide Formula in detail.

The chemical formula of the ammonium hydroxide is NH4OH. The molar mass is 35.04 g/mol-1. The compound structure is made by 1 hydroxide anion (OH–) and 1 ammonium cation NH4+ and these share an ionic bond. An image showing its chemical structure is below in the common representations that we generally use for the organic molecules. 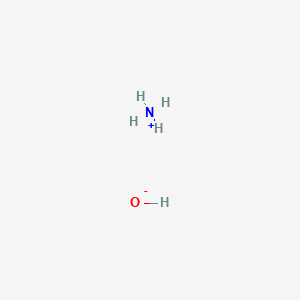 Ammonium hydroxide occurs by the dissolution of ammonia inside the water. However, this is a totally natural process.

Ammonium hydroxide is a basic compound that partially dissociates in the water keeping the next equilibrium with the ammonium ion and the hydroxide ion, moreover, it is a weak compound:

The equilibrium comes in use for regulating the pH of the solutions due to the ion OH– maximizes the pOH of the basicity level of any solution.

Basicity of Ammonia in Water

In an aqueous solution, the ammonia deprotonates a minimal fraction of the water to provide ammonium and hydroxide:

Ammonium hydroxide’s most common use is as a household cleaner, for this purpose it comes in use as a solution of 1-3%. In some chemical processes, we can use it as a precursor to form the alkylamines. Moreover, we also use the Ammonium hydroxide as an acidity regulator to reduce the acidity in food due to the release of the hydroxide in the solution.

Ammonium hydroxide can also cause severe damage to the eyes and the skin. It is very toxic to aquatic life at the same time.

Many traditional qualitative inorganic analysis uses aqueous ammonia as a complex ant and base. Like multiple amines, it provides a deep blue color with copper (II) solutions. However, the ammonia solution can dissolve the silver oxide residues, such as those formed from Tollens’ reagent. It is also present in the solutions we generally use to clean gold, silver, and platinum jewellery also but may have adverse effects on porous gemstones such as the opals and the pearls.