Boyle’s Law may be a vital gas law in chemistry. Boyle’s law or the Boyle-Mariotte law is another name of Boyle’s law. The law correlates how the pressure of a gas increases with a decrease within the volume of the gas. During this article, we’ll study Boyle’s law formula thoroughly with its applications and various properties.

Boyle’s law states for a hard and fast amount of an indoor perfect gas, its absolute pressure is inversely proportional to its volume at a continuing temperature. 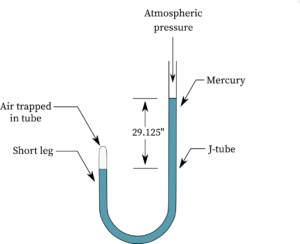 The same procedure was repeated for various amounts of mercury within the tube and corresponding volumes (the volume of the compressed gas within the shorter end in arbitrary units) and pressures (the height difference of mercury between the 2 ends of the tube) were recorded. From the experiment, Boyle concluded that the pressure of a gas is inversely proportional to its volume.

The law can also be used to find the pressure or volume of a system when the temperature is held constant: P1V1=P2V2

Boyle’s law is applicable only to ideal gases. The law holds good only at high temperatures and low pressures. The law fails at high pressures. the merchandise of the pressure and volume doesn’t remain constant at high pressures but shows a small increase. This increase is thanks to a rise within the volume which is caused by repulsive forces among the molecules.

The law also can be derived theoretically supported the presumed existence of atoms and molecules and assumptions about motion and perfectly elastic collisions.

So, the quantity when the pressure increases to 60.0 mmHg is going to be 8.2 litres

Therefore, the quantity of the container in litres is going to be 0.198 litres.