Bromine formula has another name as Dibromine formula or Brome. It is a halogen and has an atomic symbol Br. In the year 1825-1826 scientists discovered the Dibromine. Those scientists were Antoine Ballard and Carl Jacob Lowing. Brome is a volatile type of liquid having a reddish-brown colour. It has a type of pungent odor but giving the suffocating vapors. It is soluble in water and is denser than water. Also.it is toxic and corrosive in nature as well. This topic will explain the Bromine Formula. Let us learn it here! 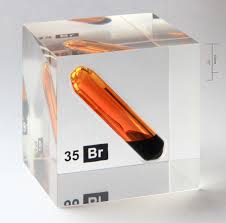 Vapors of Bromine may cause acute and chronic poisoning. It is a corrosive element in nature. It may lead to death due to the circulatory collapse. Therefore the least oral lethal dose recommended for humans is 14 mg per kg weight.

Its symbol is Br. Molecular formula of Bromine is:

Bromine is like chlorine, fluorine, and iodine. It is one of the elements in the chemical group which is  “halogens”. Bromine was discovered as a chemical element until 1826 when the French chemist Antoine Ballard isolated it from chlorine.

But, bromine is never found in its elemental form naturally, in the compounds with other substances. Those are bromides of them. These are useful as raw material to produce commercial brominated products.

Bromine is abundant in nature as the bromide salts or also as organobromine compounds. The most visible form of bromine is from the soluble salts found in seawater, salt lakes, inland seas, and brine wells. The main areas of bromine production in the world are from salt brines found in the USA and China.

Also, it presents in the Dead Sea in Israel and Jordan and from ocean water in Wales and Japan. Bromine is also available in the rock and the earth’s crust.

One of the major uses of bromine is as a water purifier and as an alternative to the chlorine. Brominated compounds are useful for water treatment in swimming pools and hot tubs. It is also used to control algae and bacterial growth in industrial processes.

Bromine compounds are effective as pesticides. It is useful both as to soil fumigants in agriculture, and as a fumigant to prevent pests.  In the past, bromine compounds were useful in leaded fuel, as a constituent of “anti-knock fluid”.

A key use of bromine compounds is in the manufacture of pharmaceuticals. Brominated substances are the important ingredients of many prescription drugs like analgesics, sedatives, and antihistamines. Some of these drugs are also effective in the treatment of pneumonia, and cocaine addiction.

Currently, pharmaceuticals are using it in their manufacturing process for the treatment of Alzheimer’s disease and in anti-cancer and AIDS drugs.

Q.1: Compute the molar mass of the Bromine compound.

The molecular weight of Bromine is 159.808 gram per mole.