1-Butanol is also referred to as n-butanol or butyl alcohol. Sometimes it is also called as biobutanol when produced biologically. It is an alcohol with a 4 carbon structure and the molecular formula of C4H10O. It is mainly in use as a solvent, as an intermediate in chemical synthesis, and as a fuel. There are four isomeric structures for butanol existing. The straight-chain isomer with the alcohol at an internal carbon is 2-butanol. The branched isomer with the alcohol at a terminal carbon is named as isobutanol. And the branched isomer with the alcohol at the internal carbon is named as tert-butanol. 1-Butanol is possible in small amounts by gut microbial fermentation through the butanoate metabolic pathway. Learn Butan 1 Ol Formula here. 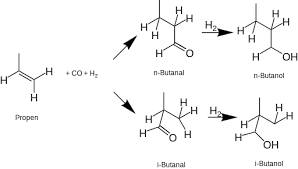 Butan 1 Ol is a colorless liquid having a harsh, alcoholic and sweet banana-like odor. It is a permitted edible flavoring agent that is used in the production of fruit, rum, whiskey, butter, cream, and ice cream. n-Butanol exists naturally as a minor product of the fermentation of sugars and carbohydrates. And it is possibly existing in many food and beverages.

Its molecular formula is:

Butan 1 Ol is primary alcohol which has 4 carbon atoms, 10 Hydrogen atoms, and 1 Oxygen.

n-Butyl alcohol is a liquid of no color. It has a mild alcoholic, but harsh odor with banana. It dissolves in water.

n-Butyl alcohol is useful as a solvent in surface coatings. These can include varnishes, resins, waxes, and gums. It is also useful in the manufacture of other butyl compounds. It is a product of fermentation. Thus, it also exists in the volatiles of foods like cheese, muskmelon and cooked rice.

This compound is also available in the surface water and air both. One can often find it in the indoor air of new construction. It breaks down in the air by reaction with the radicals. Also, it evaporates from soil and water surfaces.

n-Butyl alcohol which remains in soil or water will be broken down by the microorganisms. But, it does not builds up in aquatic organisms.

n-Butyl alcohol, in the liquid or vapor phase, may cause eye irritation in humans. It can cause blurred vision, increased tear production, light sensitivity, and burning. n-Butyl alcohol may also cause skin and upper respiratory tract irritation. Signs of the central nervous system depression are the adverse effects possible with high doses of n-butyl alcohol.

Solution: Its formula is :