Caffeine is one of the most used drugs in the world. We find it in coffee, tea, soda, some medications, and energy drinks. Its positive and negative side effects of caffeine use are important to understand. This article will describe the chemical composition and side effects of the caffeine. Let us learn the Caffeine Chemical Formula. 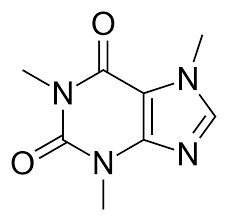 Whether it’s a morning cup of java, a cola with a value meal, or an energy drink to beat the afternoon slump, or a chocolate bar to relieve the stressful day. Most of us have used the drug caffeine at some time during our lives. This caffeine is the drug.

A drug is a chemical substance that has a biological effect. And caffeine, while naturally occurring, does have an effect on the body. It can even cause dependency, and for some, there are even withdrawal symptoms.

Caffeine works as a stimulant and is psychotropic as it also contains mood-altering properties. It is one of the most widely used legal drugs in the world. We derive caffeine naturally from the insecticide present in over 60 plants. It is also found in coffee beans, tea leaves, yerba mate, guarana berries, kola nuts, and cacao pods.

But, we can also synthesize it in chemical labs to add to the food or drugs. Caffeine contains methylxanthines which are a molecular compound derivative of xanthine. Xanthine is a high-protein purine base found in animal or plant tissues.

The formula of Caffeine:

We also know caffeine by the IUPAC name 1, 3, 7-Trimethylpurine-2,6-dione. It is an organic compound that is part of the list of the Most Essential Medicines of the WHO. It is also part of the much-consumed drink coffee and also is a very popular stimulant.

The caffeine chemical formula is:

Caffeine can be found in 16 different species while the most popular is the coffee and tea plants. We also find it in the yerba mate leaves and guarana seeds.

Caffeine chemical is mostly obtained from the different plants which are cultivated for this. Also, tea or coffee leaves contain a maximum of 5% of caffeine. The caffeine is isolated by the extraction using organic solvents and through a high-pressure extraction. There are a few methods like the reaction between dimethyl urea and malonic acid to produce caffeine.

It is a white, odorless and hygroscopic crystalline solid. Its taste is bitter and its density is 1.23 g \(mL^{-1}\). Its melting point is 235 degrees C. It is soluble in water.

It is a central nervous system stimulant. The caffeine molecule can act, because the molecule structure is highly similar to adenosine molecule, particularly on the part corresponding to the nitrogen base adenine.

Solution: Its formula is:

Its molar mass is:

Solution: Caffeine can be consumed in low doses, but it is very toxic due to the high doses. It is toxic while inhalation or ingestion and may cause infertility too. It is not flammable but it is probably combustible.