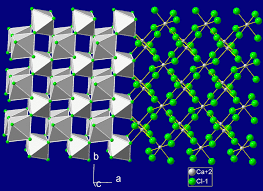 What is Calcium Bromide?

Calcium bromide, also knowns as calcium dibromide, is a chemical compound known for being used in some drilling fluids and food preservatives. Calcium Dibromide is the non-damaging to any formation. It is chemically as well as thermally stable. Other solutions containing chlorides and bromides can be blended with this compound.

It is produced by reacting calcium carbonate \(CaCO_3\) and calcium oxide with hydrobromic acid i.e. HBr. Calcium bromide is not found in nature.

The formula for Calcium Bromide:

The chemical formula of the Calcium Bromide is

This compound is commonly found as a hydrated salt with two molecules of water and can also be found as a hexahydrate salt. It is formed by one cation \(Ca^{2+}\) and two anions \(Br^{-}\). Its structure is an octahedron with Ca centers bound to a total of six anion Br- through ionic bonds.

Calcium bromide is prepared from the reaction of calcium oxide with hydrobromic acid. In another way, we can prepare it with the reaction of metallic calcium and elemental bromine:

Calcium bromide can suffer many reactions. It is useful for the chemical industry is the formation of calcium oxide from calcium bromide and oxygen gas. This reaction takes place at high temperatures to produce bromine gas.

It is mainly in use as a dense aqueous solution for drilling fluids. Also, it has an important application in as neuroses medication, food preservatives, freezing mixtures, fire retardants, and in photography.

This salt is in use by the food industries as a preservative and as a component of freezing mixtures. It is also useful as a fire retardant, as a wood preservative, and as a dehydrating agent.

Q.1: What are the serious health hazards of Calcium Bromide?

Solution: Calcium bromide can irritate eyes, skin and mucous too. It is very toxic by ingestion. It is not combustible or flammable.

Its molar mass will be:

Thus the molar mass of Calcium Bromide is 199.89 gram per mole.