A carbonate may be a salt of the acid and a carbon oxoanion. Bicarbonate is the conjugate acid of carbonate. It is an intermediate form. It’s a polyatomic anion. However, it plays an important role. Within the physiological pH buffering system, it is important. During this article, we’ll discuss the carbonate ion formula, its reactions, and its various properties and solved examples.

It may be an anion and includes a trigonal planar molecular structure. It consists of an atom surrounded by three oxygen atoms. In addition, it may be a moderately strong base. So by definition of a Lewis base, it attracts protons in aqueous solutions. 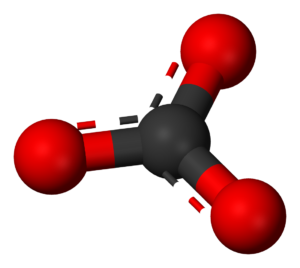 It may be a moderately strong base. Alkali metals are often mined within the sort of Na2CO3, washing soda. Apart from Li2CO3, alkaline metal carbonates are stable. Lithane was accustomed to treat individuals who are manic depressive. Washing soda (soda ash) is used within the production of glass. Carbonate is limestone. Bicarbonate of soda is often isolated and sold or converted to washing soda by heating.

All of the alkali metals react with its ions and make stable compounds. The exception rule is Li2CO3. In addition, lithium and magnesium have very similar properties. Their similarities are stated as a diagonal relationship. It possibly because of their comparable size. Therefore, lithium and its compounds don’t react an equivalent to other groups 1 element.

Lithium carbonate, Li2CO3 is often accustomed to treat patients who are manic depressive.

Group 2 carbonates are the foremost important minerals of the alkaline-earth metal metals. Their insolubility in water and their solubility in acidic solution makes them ideal reservoirs for petroleum. One of the foremost significant groups 2 carbonates is carbonate. Moreover, it’s the chief constituent of limestone. And most importantly, they used primarily for building stones. It includes the manufacturing of glasses, Portland cement, and therefore the formation of limestone caves.

A carbonate salt forms when a charged ion, M+, M2+, or M3+. In addition, it associates with the charged oxygen atoms of the ion. It is by forming attractions with them, forming an ionic compound:

Q1] How carbonate and water formed from its ions?

Solution – Hydrogen carbonates are amphoteric because they act as both weak acids and weak bases. As a result, it acts as acids and reacts with solutions of soluble hydroxides to make carbonate and water.

Q2] How Carbonate ions act as a base?

Solution – Carbonate ions combine with hydrogen ions in two stages. The primary step is to form bicarbonate ions, and therefore the second is to provide CO2 and water.

Solution – The 2+ Hexa aqua ions aren’t strongly acidic enough to release CO2 from it. Similarly, in these cases, you continue to get a precipitate. But it’s a precipitate of what we loosely call “metal carbonate”.