Chlorine Gas Formula- It is an inorganic gas, controversial for being used as a chemical weapon. Mostly we use it in precise quantities in chemical industries. Furthermore, the most common compound chlorine that we know and are using from ancient times is sodium chloride (common salt). In about 1630, chlorine gas was first synthesized in a chemical reaction, but we do not recognize it as a fundamentally important substance. Also, it is the second lightest of the halogens. In the periodic table, it appears between fluorine and bromine and its properties are mostly lie in between them. 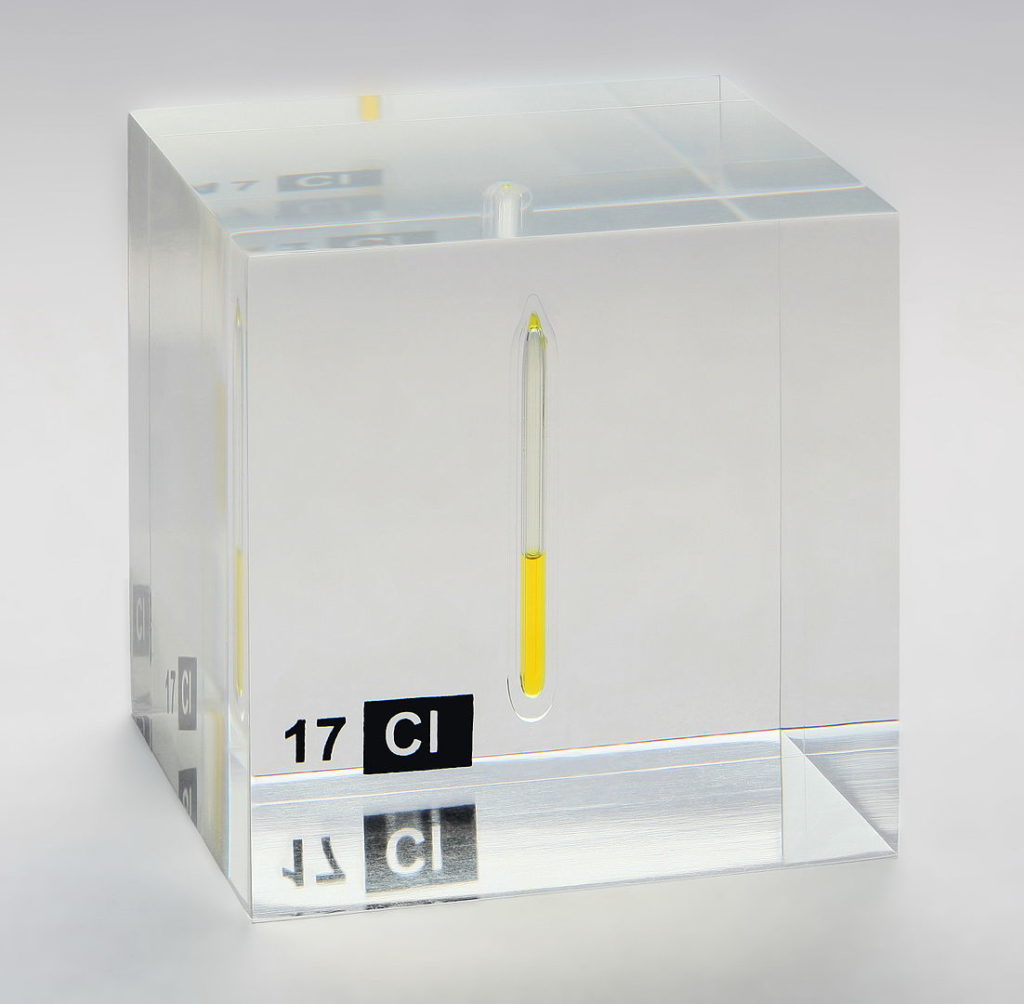 Its chemical structure is Cl2and its molar mass is 70 g/mol. Furthermore, its structure is Cl-Cl, which is also the element form of the chlorine element. It consists of two atoms that join together by a covalent bond.

Furthermore, both the atoms have an sp3 formation that is their structure is tetrahedral. We can write is chemical structure as below, in the common representations that we use for organic molecules.

The occurrence of chlorine gas

It is extremely reactive that’s why we cannot find it in nature, but the chlorine ion is largely present in nature especially in the form of inorganic salts such as NaCl (Sodium Chloride). Moreover, this process is cheap as we can extract sodium chloride from lakes, seawater, or mineral deposits.

We can prepare chlorine by combining hydrochloric acid and manganese dioxide.

It is greenish-yellow with a pungent suffocating odor gas. Also, it converts to liquid at 35 oC and is slightly soluble in water. In addition, we sell it as a liquefied compressed gas.

It shows many of the characteristics of elementary chlorine. Also, it is the elementary form of chlorine element because the configuration of the chlorine atom is [Ne]3s23p5, being unsound for existing as isolated specie.

But, when two chlorine’s two atoms form a bond then they share one electron, making with both of them get the electronic configuration (Cl) that is much stable.

We use it in the treatment of water because of its disinfectant properties. Also, we use it in paper industries as a bleaching agent. The most common compound by a huge margin is sodium chloride and it is the main source of chlorine and hydrochloric acid for the huge chlorine chemicals industry today.

Today they trade about 15000 chlorine-containing compounds commercially that include such diverse compounds as chlorinated methanes and ethanes, vinyl chloride and its polymer polyvinyl chloride (PVC), aluminum trichloride for catalysis, the chlorides of magnesium, zirconium, hafnium, and titanium that are the precursors for producing the pure elements and so on.

Its concentration form is very harmful, being fatal if inhaled.  Also, it causes serious eye and skin irritation. Being a strong oxidizing agent it can easily cause fire by reacting with other flammable materials. Chlorine is poisonous to aquatic life.

It tends to accumulate at the bottom of poorly ventilated spaces because it is denser than air. At high temperature, chlorine combines with the element iron to cause a strongly exothermic reaction that creates a chlorine-iron fire.

Solution: we can prepare chlorine gas by chloralkali method, in which we decompose a solution of NaCl electrolytically by application of a current. This produces chlorine gas, hydrogen gas, and sodium hydroxide. The reaction is: