Citric acid may be a colourless crystalline compound. It belongs to the family of carboxylic acids. It may be a weak organic acid and located in citrus fruits. And it exists in trace amounts during a sort of fruits and vegetables. During this chapter, we’ll study the citric acid formula, its characteristics, and its applications.

Citric acid may be a natural preservative. It’s also wont to add an acidic (sour) taste to foods and soft drinks. It’s one of a series of compounds involved within the physiological oxidation of fats, proteins, and carbohydrates to CO2 and water. In biochemistry, intermediate within the acid cycle occurs within the metabolism of all aerobic organisms.

Widely use of it is as an acidifier, as a flavouring and a chelating agent. Citrate could also be a derivative of acid, the salts, esters, and thus the polyatomic anion found in solution. An example of the previous, a salt is trisodium citrate and an ester is triethyl citrate. The formula of the citrate ion is C6H5O3−7 or C3H5O(COO)3−3. 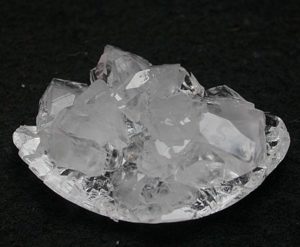 The citrate ion forms complexes with metallic cations. The stability constants for the formation of these complexes are quite big because of what we call the chelate effect. It forms complexes even with alkali metal cations.

Formation of the chelate complex with the help of all three carboxylate groups gives 7 and 8 members of chelate rings. The consequence of this is deprotonation of the hydroxyl group and formation of the more stable 5-membered ring, as in ammonium ferric citrate, (NH4)5Fe(C6H4O7)2·2H2O.

Solution: Acetyl CoA and oxaloacetic acid condense to form citric acid. However, the acetyl group CH3COO is transferred from CoA to oxaloacetic acid at the ketone carbon. The net effect is to hitch a 2 carbon piece with a 4 carbon piece to form acid which is 6 carbons. this is often just called the synthesis of acid.

Two steps are there to isomerize the position of the -OH group on citric acid. The first step is dehydration of alcohol to make an alkene. The cis-aconitic acid remains sure to the enzyme aconitase in readiness for the subsequent steps. Hydration does not follow Markovnikov’s Rule. In addition, the net effect of reactions has been to move the -OH group from C-3 to C-2 and it is isocitric acid.

Then the Oxidation reaction of alcohol converting to ketone occurs. Placing the -OH group since it must be adjacent to a carboxylic acid group in either case and forms malic acid. The final reaction in the citric acid cycle is the oxidation of an alcohol to a ketone to make oxaloacetic acid.