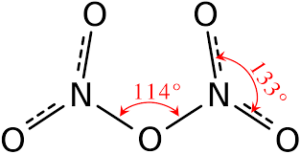 This compound occurs as a colorless to white crystalline solid which easily sublimes slightly above the room temperature. It slowly decomposes at room temperature into nitrogen dioxide and oxygen gas. It is easily soluble in water and chloroform both.

During the year 1840, Deville was the first to identify and report to the Dinitrogen Pentoxide. It can be synthesized by doing dehydration of nitric acid with phosphorus V oxide. It is mainly useful as a reagent to introduce nitrogen dioxide functionality.

It is a strong oxidizer and can form explosive mixtures with ammonium salts and organic compounds. When it decomposes it produces highly toxic nitrogen dioxide gas. It has an irritating odor and as well as it is highly poisonous. Under normal atmospheric conditions, it exists in equilibrium with nitrogen tetroxide i.e. N_2 O_4.

The formula for Dinitrogen Pentoxide

This white solid formed by the dehydration of nitric acid by phosphorus (V) oxide. Its chemical equation is:

Its density is 1.642 gram per cubic cm. Its boiling point is 47-degree C and the melting point is 41 degrees C. It is heavier than air.

It is useful in the following:

Therefore, the molar mass of Dinitrogen Pentoxide is 108.01 gram per mole.