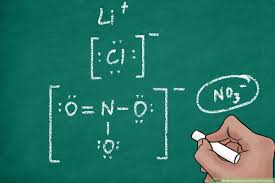 We also know the Electron dot structures as Lewis dot formula. We can draw it if we know the molecular formula of the compound. It is also useful to represent the atomic state of elements. We represent an electron dot structure by using the element symbol. Start from the top of the element symbol, then add dots in a clockwise manner to complete the number of valence electrons. The maximum number of electrons can be eight.

How to Draw Electron Dot Formula?

Electron Dot Formula comprises of one dot for every valence electron with the element’s symbol.  Note down that a skeletal structure displaying a realistic bonding pattern by means of only the element symbols is very important.

The steps needed to draw them are:

Q.2: Give the electron dot formula for Aluminum atom.

Aluminum is in group IIIA of the chemical periodic table. So, it has three valence electrons. So, its symbol Al will be surrounded by three dots.

Solution: In the Electron dot formula, we denote the electrons by dots around the symbol of elements. Electrons sharing for covalent bonding is the glue for holding the atoms together.