The lead IV acetate formula or the lead tetraacetate is a chemical compound that has the chemical formula i.e. Pb(C2H3O2)4. It is a solid that has no colour and is soluble with the nonpolar organic solvents, indicating that it is not a type of salt. It is degraded or spoiled by the moisture present in the air and it is typically stored with the additional acetic acid. The compound is useful in the process of organic synthesis.

In the solid-state the lead (IV) centres are synchronized by 4 acetate ions, these ions are bidentate, each coordinates by 2 oxygen atoms at a time. The lead atom is 8 coordinate and the O atoms form a flattened trigonal dodecahedron. An image showing its chemical structure is below in the common representations that we generally use for the organic molecules: 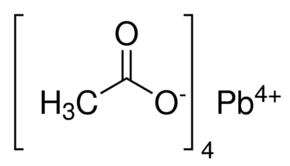 The lead tetraacetate is a durable and strong oxidizing agent, moreover, it is a source of the acetyloxy groups and a general reagent for the introduction of the lead into the organolead compounds. Some of its various uses in organic chemistry are:

Acetylation of benzylic, allylic and α-oxygen ether C-H bonds, such as the photochemical transformation of the dioxane to 1,4-dioxene by the 2-acetoxy-1,4-dioxane intermediate and the transformation of α-pinene to the verbenone.

An alternate reagent to the bromine in the Hofmann reorganization.

The oxidation of the hydrazones to the diazo compounds such as that of hexafluoroacetone hydrazone to the bis (trifluoromethyl) diazomethane.

Formation of aziridines, such as the reaction of the N-aminophthalimide and the stilbene.

Cleavage of α-hydroxy acids or 1,2 diols to their corresponding aldehydes or the ketones, frequently replacing ozonolysis, for example, the oxidation of the di-n-butyl d-tartrate to the n-butyl glyoxylate.

Reaction with the alkenes for producing the γ-lactones.

Oxidation of the alcohols containing a δ-proton to the cyclic ethers.

Oxidative cleavage of the definite allyl alcohols in the conjunction with the ozone.

Conversion of acetophenones to phenylacetic acids.

Decarboxylation of the carboxylic acids to the alkyl halides in the Kochi reaction.

The lead (IV) acetate may be fatal when we ingest it, inhale it, or absorb it through our skin. It can cause irritation to the skin of a living being, it can also affect the eyes and the respiratory tract at the same time. It is a neurotoxin as well. Moreover, it also affects the gum tissue, the central nervous system, kidneys, blood vessels, and the blood as well, and also the reproductive system of a human being.

It is applicable in the process of organic synthesis as an oxidizing agent.

It looks like pink colour or sometimes as colourless crystals. It has a melting point of approximately 175 °C, whereas, it decomposes at the nailing point. Further, the density of the lead IV acetate is near about 2.228 g/cm3. Moreover, it has a molar mass of 443.376 g/mol.

It dissolves in the water, as it is soluble inside the water. However, it is also soluble with the hot glacial acetic acid, benzene, chloroform, tetra-chloro ethane, and the nitrobenzene as well.

Question: What is the preparation reaction for the Lead IV Acetate i.e. Pb(C2H3O2)4?

Solution: It is generally prepared by treating red lead with the acetic acid and the acetic anhydride i.e. Ac2O, which absorbs the water (H2O). The net reaction is given below:

The remaining lead (II) acetate can be easily oxidized to the tetraacetate partially, as shown in the reaction below: